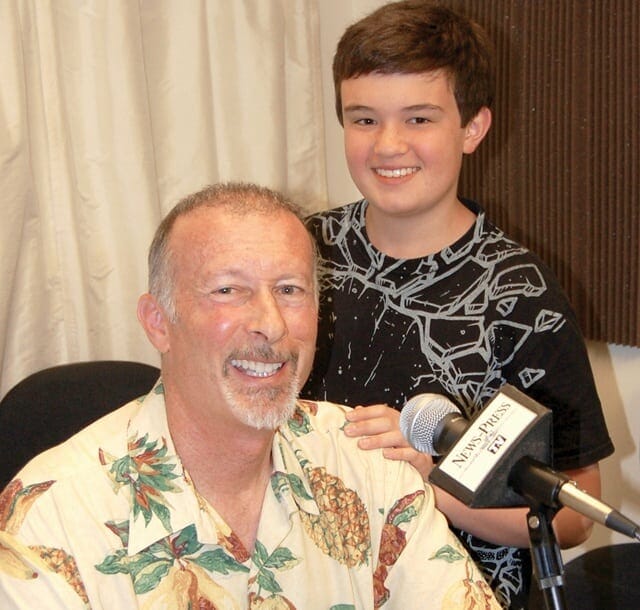 [quote style=”boxed”]I began with no concern for making money so I was scattered as a result. It wasn’t an issue because that wasn’t my primary goal. If I was starting again, I’d start with a more focused business plan that did include monetization![/quote]

Bruce Sallan carries on his mission not only through his book and radio show, but also with his column “A Dad’s Point-of-View”, syndicated in over 100 newspapers and websites worldwide, as well as with his dedication to his community on Facebook and Twitter. Join Bruce and his community every Thursday from 6pm -7pm PST  for #DadChat, the Tweet Chat that Bruce hosts.

I am working on several things at once, as I always do. I like to think of myself as the most versatile parent blogger as I blog, vlog, run #DadChat, do a radio show (on four AM stations), guest-blog, write a comic strip, speak at conventions, and ski A LOT! My big endeavor now is to monetize my efforts in a more business-like fashion. Up till now, I’ve been the “throw the pasta against the wall and see what sticks” sort of guy. I have finally hired a Social Media manager and we’re working on making my work more fiscally productive.

Where did the idea for “A Dad’s Point-of-View” come from?

When I became a single at home dad -24/7- due to circumstances, I faced a lot of unexpected prejudice. My boys were in elementary school and most of the other moms and dads knew I was going through a divorce. My wife had literally left and I was taking care of my boys full-time. At the same time I was also an only child caring for my ailing parents, yet most moms I met asked the same question: “What do you do all day?” I was astonished at the naivety and rudeness of that question but, at the time, I didn’t have a strong retort (as I would now). Ironically, the dads also asked the same, but different question, “When are you going back to work?”  It was then and there that I realized that dads needed an advocate and I was going to be that person!

I am up between 5 and 6 a.m. The first thing I do is go through all my tweets, emails, and Triberr stream. That can take up to 2 hours. The rest of the day is split between writing, taking care of my boys, working out, writing, eating, writing, and on Thursdays doing my radio show and #DadChat – my fun, but crazy day!

It comes naturally to me. I am a show-man after 25 years in the television business. I was known for pitching ideas in creative ways. I do the same with all my Social Media, which is why I have so much fun doing my I’m not That Dad vlogs, my Because I Said So comic strip, radio show, and #DadChat.

Vlogging. I believe it is becoming more ubiquitous and it fits me to a tee!

I made the best of every job I had. I worked for jerks now and then, and that is where I learned things – how to get along with anyone!

Have kids earlier in life and have more of them!

Learn and use social media now!

I began with no concern for making money so I was scattered as a result. It wasn’t an issue because that wasn’t my primary goal. If I was starting again, I’d start with a more focused business plan that did include monetization!

Follow @BruceSallan, Stay In the Loop with my newsletter – sign up at BruceSallan.com, and come to #DadChat on Thursdays from 6:00 – 7:00 p.m. THE POINT with that blatant self-promotion is don’t be afraid to self-promote!

I’d have killed Hitler when he was a baby.

Twitter, Facebook, and TweetGrid (for participating in tweet-chats). I love that the first two literally bring the world to me. I love TweetGrid because it makes following the busy chats – like #DadChat and #BlogChat – possible.

Anything by Guy Kawasaki and Mari Smith’s new book, the name of which I’ve forgotten. Oh, I like Carrie Wilkerson’s The Barefoot Executive, too. I suppose I should add my own book, A Dad’s Point-of-View: We ARE Half the Equation.

I’m entertaining and informative. You will not be bored, I promise – or your money back!

I laugh out loud every day dozens of times. Usually, it’s from a tweet, an email joke, or my family/dogs!

Just go to BruceSallan.com and all my links/connections are there!