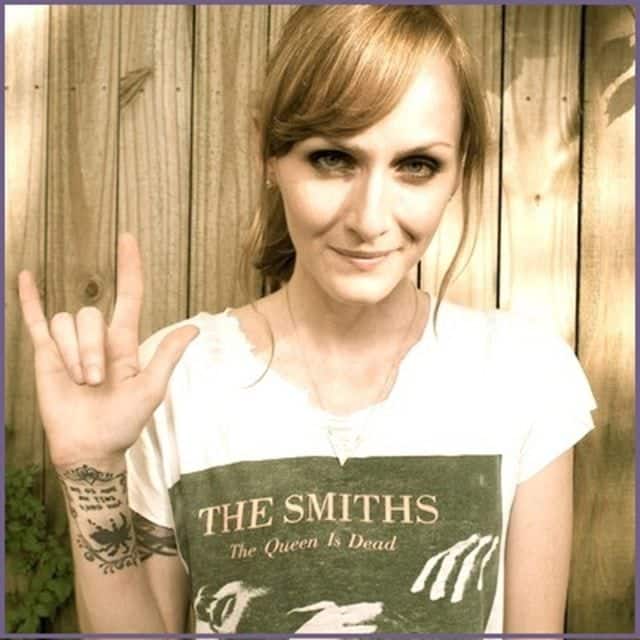 [quote style=”boxed”]I would believe in myself and my work earlier. It took me a long time to get to a place in life where I felt like my vision was valid. I think I was waiting for someone to tell me it was. That’s unnecessary. All of our ideas and inspirations are valid, regardless of outside opinion.[/quote]

Buick Audra is a musician, producer and indie record label owner living and working in Nashville.

She spent eight years as the guitarist and vocalist for the Boston-based hard rock trio, 33 Slade, alongside bassist Levi Fuller and drummer Boey Bertold. Buick has made three solo albums to date. She currently fronts Friendship Commanders, a Nashville punk band that she formed with Jerry Roe and Tim Marks. She makes albums at her own Fort Knockout studio and owns Trimming The Shield Records. She likes pizza, pomegranates and every two years or so – a virgin, vegan pina colada.

For my own work, I’m in the middle of making demos for sixty of my leftover songs – which means that they probably won’t make it on to any of my albums. I’m posting them to my website as I go, for people to check out (which is scary every single time). I’m about forty songs in, as I write this. I also just started to track an EP with my new band, Friendship Commanders. We’re a punk band here in Nashville.

As far as working with others goes, I produced an album for Boey Russell (out of Somerville, MA) which we recently mixed with Eric McConnell. It will come out on my indie label, Trimming The Shield Records, in Spring of 2013. I’m also producing some individual songs on artists and releasing them on my label in groups of three. I’m calling them “three-sided singles.” They’re like mini-compilations. The first one is almost done.

Where did the idea for Trimming The Shield Records come from?

The necessity for the label stemmed out of having a pile of music with no one to release it. Being a fan of so many indie labels, I figured that business/art model was best for me and my work. Basically, it’s been a tidy way to have all of my music come out under one umbrella. In this coming year, I’ll finally start releasing work by other artists and bands. That’s a big milestone for me.

The name of the label comes from a story from my childhood. My younger brother was supposed to make a family crest for school, and he waited until the last minute to get started. He was in such a rush to get it done, but he couldn’t seem to make the thing symmetrical, and he ended up trimming it down to nothing. From then on, we referred to any kind of procrastination or messy work as “trimming the shield.”

I haven’t yet landed on a typical day, but a good day looks like me getting up and working from a list of rotating projects. I tend to record every week, at least a couple of days here and there. Recently, there have been a bunch of Friendship Commanders rehearsals, as well as emails and phone calls about getting the Boey Russell record out. Some nights I perform live; some nights I’m on the couch holding my guitar. It tends to be slightly different every day. I once read Twyla Tharp’s book, The Creative Habit, and while I have a mighty respect for her process of doing the same exact thing every morning – it would make me feel very stifled.

I say it out loud. Whatever it is, if an idea is to leave the mind, go through the hands, and end up somewhere outside of me, I have to make myself accountable by telling someone. From there, the journey varies, but it always starts with me calling someone and telling them about my new concept.

I worked at a really snobby high-end clothing store in Boston about a dozen years ago. The owners were really controlling and seemed to expect everyone who worked for them to conform to their ideas and way of life (for thirteen dollars an hour). I learned that I don’t conform well, and that was an important lesson. I’ve learned it a few other times in my life, and I’m sure I will again… but it never stops being valuable information.

I would believe in myself and my work earlier. It took me a long time to get to a place in life where I felt like my vision was valid. I think I was waiting for someone to tell me it was. That’s unnecessary. All of our ideas and inspirations are valid, regardless of outside opinion.

I also thank everyone, all the time. Gratitude and graciousness are appreciated and remembered.

Oh, man. Right to the bone, eh? I entered into a joint venture with someone I didn’t know enough about. It robbed me of quite a bit energy, output and return. Some of that, I never got back. What I did overcome, was the need to gain it back. The decision to cut my losses and throw the proverbial baby out with the bathwater was a sound one. Did it sting? Yes. Does it still? Not as much.

Give your work away, whether it’s tangible or not. Give your time away. Learn from the process.

I can only change myself and what I bring into the world. It might make big impact, it might not. But, I aim to be a force of positivity and progress in all that I do.

I never, ever know how to do the thing I am about to do. But, I always do it.

Bossypants by Tina Fey. Because it’s brilliant and funny and true.

I laughed through most of Silver Linings Playbook, but particularly the scene where Bradley Cooper reacts to the ending of a Hemingway book. So honest.

I don’t really know. Lately, I look to the path of Steve Albini for inspiration. I enjoy what I know of his philosophies and work ethics, and really appreciate his product(s). I don’t know if that’s really a hero, but I admire the hell out of him.