Matt Dimmer – Founder and CEO of The Extra Mile 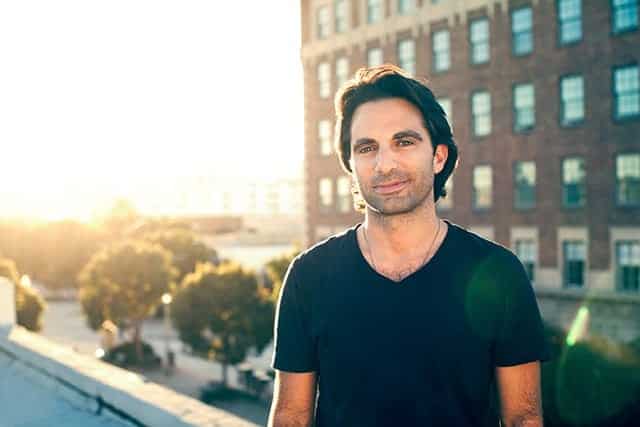 [quote style=”boxed”]Persistence. What we are trying to do has its own unique set of challenges, so it’s all about not letting up until we make progress. I’ve always been passionate about ideas and getting them made regardless of the hurdles. This one is no different. If anything, the more challenges I face, the harder I work at conquering them.[/quote]

Matt is a Creative Director at an advertising agency, and the Founder and CEO of The Extra Mile, a non-profit that was born out of the personal experience he shared with his late father. Just after relocating to LA, his dad (living in Michigan) was diagnosed with pancreatic cancer stage 4. Matt began traveling back and forth to see him, at least once a month. This went on for seven months, and during this time, there was plenty of time spent alone on airplanes reflecting on life. One Sunday after returning home from a weekend with his dad, he and his wife were sitting in their backyard when he had an idea. Did anything out there exist that allowed frequent flyer miles to be donated to those less fortunate who may be in a similar situation? Without the same means, was everyone able to have the intimate conversations that he was having with his father? Would they, at best, only be able to afford to attend the funeral from out of town? After posting the idea on his social networks, the support came pouring in. It didn’t exist, and there were clearly others that had experienced what he was going through. It was then that he knew he needed to fill that void. Matt was able to show his dad the early beginnings of the organization on one of his last trips home and legally added his father’s initials to the name of the non-profit. Currently, The Extra Mile seeks to collect unused frequent flyer miles, as well as monetary donations, either of which is then donated to people in need of traveling to visit loved ones terminally ill with cancer.

I am working on The Extra Mile, a non-profit organization I founded in May of this year. We accept frequent flyer miles and donations and give them to people who cannot afford to visit their loved ones terminally ill with cancer. With so many great charities that already exist we really haven’t seen too many that support the family specifically, especially in this situation. So I decided to create TEM.

Where did the idea for The Extra Mile come from?

The inspiration for The Extra Mile came from personal experience. In October of 2011 my dad was diagnosed with pancreatic cancer stage 4, and I had just relocated to Los Angeles from Chicago. He lived in Michigan, so I began traveling back as often as I could, about once a month. During these flights, I had a lot of time alone to think. About him, me, our relationship, and then, about others. The time I got to spend with him was priceless. Which made me realize how fortunate I was to be able to make these trips. Then I imagined if I was only able to travel back for his funeral, if I wasn’t able to see him prior to his passing and have those intimate, yet very difficult conversations where I told him how amazing he is and he told me that I’d become the man he had hoped I would. It was at that moment that I decided I needed to enable as many people as possible to experience this with their loved ones.

Currently, I work in advertising as a Creative Director. Before and after my day job is when I devote time to TEM. The early morning is usually devoted to calls with East Coast people, and catching up on social media happenings from the previous night and that morning. At night is usually when I return emails that have come through during the day and handle any other TEM-related responsibilities. There are still a lot of things I am learning about how an NPO runs, so undoubtedly a few times a week, something pops up.

Persistence. What we are trying to do has its own unique set of challenges, so it’s all about not letting up until we make progress. I’ve always been passionate about ideas and getting them made regardless of the hurdles. This one is no different. If anything, the more challenges I face, the harder I work at conquering them.

NFC (Near field communication). Knowing that mobile payment technology is so close is really exciting. In China and India they’re already using this for different applications and Google wallet is bringing it one step closer in the US. For us, it would be another great avenue to accept donations, and rumor has it, the iPhone 6 will contain this ability.

It was at an accounting firm right out of college. I was in the ‘creative’ department. Basically I was hired to make all the PowerPoint presentations look unlike standard templates, among other design responsibilities. It was rough. I was supposed to wear a suit everyday, but couldn’t afford that, so I settled on wearing a tie. The group I was in consisted of a bunch of older women (I was the ONLY guy) who were in their 40s-50s. They’d bake pies and treat me like their son/grandson. I really had to change my thought process, and the way I communicated with them. We were in a lower level of the building, and didn’t really come into contact with the rest of the company too often. The work would get dropped off and we were expected to have it completed by a certain date. I really crafted my personnel skills then, as I had to adapt to surroundings that were unfamiliar to me. Coming straight out of art school, I was a bit out of my element, but believe now that this added to my ability to relate to people so well.

Nothing. TEM is, so far, exactly what I want it to be. A NPO that is focusing on a niche group of individuals and trying to make their lives a little bit better, in the toughest of times. Unless you want to give me a massive donation, then, that’s a different story.

Make connections and network. Everything is about relationships. EVERY-THING. I started telling students that when I would speak at my alma mater, and tried to drill it into their heads. The people you meet will, at some point, be an asset to you and you to them. I’ve always kept in close contact with everyone in my circles, and it’s beginning to pay off. Mind you, it’s a lot of work to maintain, but if you are diligent, at some point they’ll begin to be fruitful.

Well, knock on wood, I haven’t had any failures thus far with The Extra Mile. But, again, we’ve only been doing this for 9 months.

I bet if we could figure out how to put an mp3 player and a phone together we’d have something massive.

Suffering children. Whether it’s hunger, or lack of clean water or inadequate housing. Solving it? Well, that’s a tough one. I’ll chip away at that, after The Extra Mile gets up and running.

Bit.ly is great for tracking clicks and shortening links at the same time. Google analytics for monitoring traffic. And Spotify. I love music, all of the time, and that gives it to me wherever.

Bossypants by Tina Fey. It’s funny, it’ll allow you to clear your mind and maybe even LAUGH OUT LOUD.

Probably this week. My wife was the cause. Being married to someone that makes you laugh on a daily basis is amazing, and by that I don’t mean laughing at her. She’s great in so many ways, from all the support throughout dealing with my dad’s situation, to helping out however she can with TEM, she is amazing.

My dad. He really went above and beyond to help people, and he is the inspiration for The Extra Mile.

My motivation is to help people have the same experience I had, especially given a program like this doesn’t yet exist. I won’t stop until we are fully functional, and with the addition of new members to the team, it’s going to happen sooner than I had ever imagined.

What do you do to let off steam?

When I’m not working you can probably find me in a variety of places. Running, shopping for vintage furniture with my wife, fly fishing, or eating out. It’s important to find those outlets that allow you to turn off certain parts of your brain that you use constantly.

If there’s one thing you could convince people to add to their daily regimen, what would it be?

Do good. Life’s too damn short to walk around with a grudge, or not treat others with respect. And if there is anyway you can get involved in helping those less fortunate, do it. It’s the right thing to do, and it feels amazing to help people.

Mario Schulzke is the Founder of IdeaMensch, which he started a decade ago to learn from entrepreneurs and give a platform for their ideas.