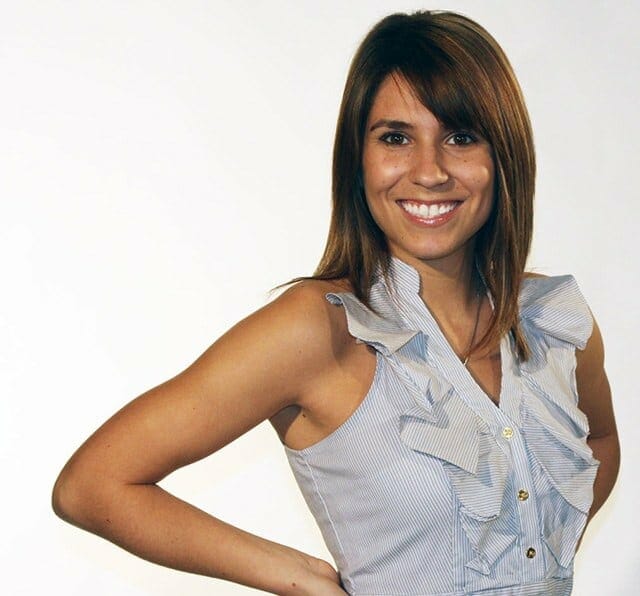 [quote style=”boxed”]I stay excited about tomorrow. I literally go to bed excited to wake up the next day knowing that it hold limitless opportunities. You never know what email will come through your inbox that makes that day special for the rest of your life. It’s that outlook that keeps you motivated to push harder for an even more thrilling future.[/quote]

Emily Belden, 27, is the author of forthcoming memoir “86’d” and the founder/CEO of Happy Happy Gay Gay – an online greeting card company that celebrates same-sex love, marriage, and milestones.

Belden graduated from Creighton University in 2008 with a degree in Journalism/Advertising. From there, she became a professional copywriter doing ads for companies like Jim Beam, Coca-Cola, Gerber, Dockers, and more.

Her writing career soared when she started her personal lifestyle blog “Total E-Bag,” which eventually segued into her debut novel (due out in December 2013). Her style has been commended by Forbes Magazine on multiple occasions and she has built a readership of over 100,000 users.

In August 2013, Belden started Happy Happy Gay Gay and made her first sale within minutes of going live with the site. Her customer base is global and her business received nods from popular publications like The Huffington Post.

Belden currently lives in the South Loop of Chicago with her boyfriend, Ryan Lange, and their rescue pitbull, Mr. Jarbles. She enjoys baking cookies, the occasional spa day, and dining out with friends and family.

Finishing edits on my debut novel “86’d” due out in December, checking to make sure my scheduled tweet went out, and showing off the newest Happy Happy Gay Gay card design.

Where did the idea for Happy Happy Gay Gay (HHGG) come from?

I came up with the idea after DOMA was shot down. My gay friend got married on live TV in California that same day and I figured “legally wed” warranted some kind of “Congrats!” card. Problem was, I couldn’t find one that fit their personalities: sassy, sexy, sarcastic. So, I decided to make my own. One card turned into 10. Ten turned into an online store that launched in August.

Each card is a flat $5. No tax, no shipping. Once the user purchases a card through the fully-functional eCommerce site, they receive a link automatically to download the artwork. They can either print the card on an 8.5 x 11 piece of paper, or send a digital version as an “e-card.” A portion of all sales goes to popular LGBT projects and foundations.

I am getting a lot of “fan-mail” since starting this venture. The site has spread like wildfire all across the globe, so usually when I wake up there are contact submission forms I must go through and reply to. People from Italy, Mexico, and everywhere in between have written in to give kudos to the concept and request more themes. I also answer press questions, reach out to LGBT organizations and bloggers, and work on new designs.

I’ve always been a creative person. I have about 8 years of ad agency/creative department experience, so I am quite used to taking something from concept to completion. I have a wickedly talented graphic artist who doubles as my web designer, so we collaborate together most hours of the day. Since there is no limit to where HHGG can go, we are constantly taking it to the next level.

I’m loving how blogging is taking the place of traditional media in some senses. For example, when it came time to get the word out about HHGG, I noticed most of my traffic was coming from blogs. Bloggers were taking the content and using it for a post or on their social media streams. This is a game-changer considering that you used to have to hit the presses in order to make an impact. Publication is much faster and way more shareable this way.

Right out of college, I worked at an advertising agency in Omaha, Nebraska wherein the creative director was your stereotypical, closed-door, egotistical artist. She was The Devil Wear Prada just without the wardrobe and in the Midwest. I could not have felt any lower on the totem pole but today I look back on it and I thank her. Because she made me push harder to create my own fate so that I’d never have to work for another “her” again.

I would have ran a small focus group – even if it was just friends and family. I would have collected some basic usability feedback before going live. I found one major glitch in our business model on day-one of launching. After that was fixed, things got better until I noticed my second major glitch a week later. This time, it was after a huge article came out so I was frustrated I didn’t spot it it sooner. When you work on something so intently for a long period of time, you definitely need a fresh set of eyes to detect the small stuff.

I stay excited about tomorrow. I literally go to bed excited to wake up the next day knowing that it hold limitless opportunities. You never know what email will come through your inbox that makes that day special for the rest of your life. It’s that outlook that keeps you motivated to push harder for an even more thrilling future.

I pitched HHGG to the alumni association of the Catholic Jesuit university from which I graduated hoping that they would promote it in their newsletters and amongst my fellow former classmates. But then it occurred to me that the church didn’t necessarily support gay marriage, so I was not able to use this as a channel for promotion as I had been counting on. It goes without saying that not everyone will need your product, but it hurt to know that there are actually people out there who are fundamentally against mine. I realized that I couldn’t let that get in the way of the good that this project could offer, so I pushed forward, ignored the haters and never looked back.

I want someone to open a restaurant called “Straw” where all items are consumed through a straw. Smoothies for breakfast, cocktails at night, milkshakes for dessert, etc.

I would make gay marriage legal starting now. Not only is loving who you want a basic human right, it would mean that all LGBTs and their friends would have a need for my product. Right now, I’m staying abreast of everything related to the Human Rights Campaign and doing what I can to spread the joy associated with same-sex love and marriage.

I wrote a manuscript about the scandal and serendipity of my early 20s. It took me three years to finish but when I did, I pitched a sample chapter to literary agents (www.ReadThisProposal.com) and signed a book deal within a month.

For me, it’s all about the social media.

Hootsuite: I can schedule content to go out months in advance. No pressure to come up with things everyday on the fly.

Facebook: My network of classmates, friends, and family have been a very loyal support network. I genuinely believe they get excited about the next update I will post.

LinkedIn: It is through this website that I have connected and stayed in touch with Pulitzer-prize winning journalists, TV producers, literary agents, and gay-rights advocates.

I recommend you read “86’d” when it comes out. Not just because I wrote it, but because it gives you a snarky look into how you can reconcile expectations of something you were really looking forward to with the reality of what occurs. Which for me, was most often the opposite.

@RyanLange – I glued 60,000 thousand pennies to my bedroom floor with this guy and made it on The Today Show for it in January of 2013.

@CMozilo – Never met her in real life, but her tweets crack me up. She’s funny and original, great way to spice up your feed.

@HomeDepot – Their social team is top-notch. I replied that they had a cute dog in a photo they had posted and the next thing I know they overnighted me a kid-sized orange Home Depot apron for our dog, complete with his name on it. They make magic happen!

I watched an episode of the show Bridezillas last night while eating dinner. The bride’s mom showed up to the wedding wearing a white dress. The bride literally screamed bloody-murder for two minutes. I can’t believe people like that exist.

My hero is Lou Carlozo. He was a reporter for the Chicago Tribune and when I was 12 years old, he selected me to be a kid-reporter for the summer. He took me to see First Lady Hillary Clinton speak at a conference. As she got up to leave (this was pre-9/11 mind you), I thought “I’ve got to ask her a question!” and charged through the crowds and the media to reach her before she exited. Lou stood back in shock by my tenacity. Even the most seasoned reporter wouldn’t have done that. I asked her what her favorite blues song was. She said Johnny B. Good. Anyhow, Lou gave me a chance to prove to myself that if you really want something, you have to be bold and go for it. Ever since then, I’ve called it “Belden-ing” something.

What is the best business mantra?

If you could have any other job in the world, what would it be?

I’d be a contestant on the crime TV show Whodunnit?