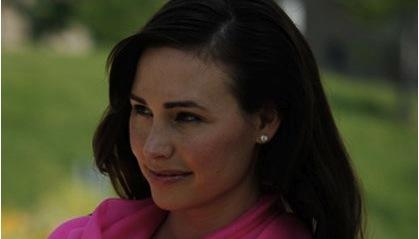 [quote style=”boxed”]I’m also never afraid to pick up the phone and call someone out of the blue. I think cold calling is a fantastic skill in terms of quickly moving your concept forward because you can immediately get feedback on assumptions that you’ve made.[/quote]

Jennifer Morehead is the founder of Lockboxer, an innovative, web-based solution that helps people price out their stuff (like a phone or TV) in order to sell, donate, or make a home inventory.

Before starting Lockboxer, Jennifer’s career was in media sales. She started as a 100% commission salesperson in Chicago for the Tribune Company’s radio station, WGN. After two years in that role, she was promoted to help run her $30 million sales department as its sales manager.

Jennifer graduated from Northwestern University with a double major in journalism and economics. She received her MBA degree from Northwestern’s Kellogg School of Management. Jennifer continues to be an active fundraiser for multiple organizations.

When not working on Lockboxer, Jennifer Morehead spends time with her husband and twin toddler sons. She loves to travel, likes to do Pilates, tolerates cooking, and she’ll occasionally do triathlons. She and her family live in Evanston, Illinois.

Lockboxer launched three months ago and we’ve gotten great feedback from our users. Right now it’s so important to engage our initial users, understand what is and isn’t working, and figure out how best to reach new users.

Where did the idea for Lockboxer come from?

My sister and her husband lost a lot of their belongings in a flood that struck their home in Cedar Rapids, Indianapolis. We had a family friend go through a fire and a co-worker of mine had a total loss when a fire destroyed his home. I knew about all these experiences where people lost things and it was impossible for them to remember what they originally owned. I continued to hear from people that they would really like to have an easy way to put together a home inventory. The core of Lockboxer is this home inventory concept, but we’ve opened it up to help people manage their things through getting pricing info to sell, record donations, or make that home inventory.

I am pretty regimented about what my day looks like. I wake up at 6 am and spend the first hour and a half with my family, getting them ready for the day. I spend a lot of my mornings meeting in person with people. I spend a lot of my afternoons writing or on the phone with people. I spend the evenings with my family. Then I spend time from 8-11 pm doing deep thinking about my business.

It’s so critical to execute on ideas. I really like to dig through tough problems to get them solved. I’m also never afraid to pick up the phone and call someone out of the blue. I think cold calling is a fantastic skill in terms of quickly moving your concept forward because you can immediately get feedback on assumptions that you’ve made.

When I was 14 years old I worked in concessions for the civic center in Lincoln, Nebraska where I grew up. It was one of the few places that employed kids under 16 so I applied and got the job. It was humbling to be in a role that so many people look down upon and so it taught me both to be kind to everyone and that I wanted to work hard and do something on my own so I wouldn’t always have to work concessions.

If I did it differently I would create my beta concept for Lockboxer, or the minimum viable product, in a shorter period of time to get it out in front of consumers quicker. I think no matter what time it would have taken, though, I would say that it should have been done sooner. No matter how many people you talk to and how many surveys you give, you really can’t judge how people will react until you get the product in front of them.

What is the one thing you do as an entrepreneur that you would do over and over again and recommend everybody else do?

Say yes. What I mean by this is when you’re telling people about what you’re doing, a lot of them want to help in some way. Sometimes it’s annoying to handle unsolicited advice or recommendations of people to meet but I always say yes. You never know when someone will lead to someone else and create a serendipitous situation.

The inspiration for Lockboxer’s color scheme came from the kitchen at a friend’s house. I was trying to figure out the right combination and for some reason her kitchen was just perfect for the site.

There are so many good ideas, but execution is key. It’s all about understanding the problem that the customer is having and making a solution that is clear for the customer.

Four Steps to the Epiphany by Steven Gary Blank. There are so many good books to read but this is the one book I keep on my desk at all times. It’s really a workbook that reminds you time and again through its tactical suggestions that it is about customers and catering to the evangelists that will love your product.

If you weren’t working on Lockboxer, what would you be doing?

@beunreasonable Their description: We accelerate social ventures with mentorship and capital at a 6-week intensive institute.

@good Their description: GOOD is the global association of individuals, businesses, and nonprofits powering what works.

I went to the Northwestern/Michigan football game last night with my twin sons who are 21 months old. The whole Northwestern cheerleading squad came up to us before the game, showering attention on my little boys, and my little guys were totally freaked out. I have this funny picture of one of my sons trying to break free from the arms of this adorable cheerleader. I’m sure it’s the only time this will happen.

Troy Henikoff, one of the founders of Excelerate.

What is your best recruitment strategy?

We live really close to Northwestern and I’ve formed relationships with professors in different areas where I want to recruit students. These relationships have been invaluable for putting me in contact with talented people before others can find them.

Get comfortable with ambiguity and the fact that you could fail. When you’re starting out and putting an idea together it’s easy to think that it will be an overwhelming success from the very beginning. In reality, it’s more complex than that. There are a lot of decisions that need to be made without a clear-cut answer. By being comfortable with this ambiguity and with failure, you can quickly eliminate certain paths you could go down and focus on the best routes to take. Be comfortable with failure and you won’t be a deer in headlights when the tough stuff happens along the way.