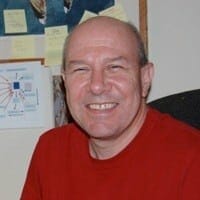 With experience that began with his first “real job” as a daily newspaper reporter and moved through PR agencies, independent consulting and in-house positions, Jim Zahniser has a well-earned insight into the workings of media and communications strategy. In his most recent professional ventures, he has led communications strategies for companies such as Castor & Pollux Pet Works  and Precor Incorporated.

While he cringes at being labeled a troglodyte for advocating old-media values and practices, Jim continues to be a voice for strategy and restraint in the era of open content – as media becomes less structured, he sees a core role for traditional PR and editorial disciplines.   And yes, prior to becoming a communications professional, actually Jim did sell school buses.

Like many of my old-school communications and marketing contemporaries, I’m scurrying to catch up with changes in the ecosystem.

For example, driven by my pet dog Pal’s sorties into neighborhood garbage cans, I’m working on a mobile solution involving a dog-collar swallow-response sensor and micro geo-location. We’re able to track swallowing activity at targeted locations, and then auto-send personalized apologies to affected neighbors, bundled with an e-gift of flowers or chocolate.

In truth, right now I’m between projects, with proposals out, including PR and marketing support for a more practical mobile app than the aforementioned.

While on the subject of dubious content . . . I’m loathe to de-friend a few associates, but, honestly . . . “On my way to coffee” is being followed immediately by “Great coffee.” And sent to hundreds of LinkedIn contacts. Editing is becoming a lost art, and self-editing a lost concept.

2. The splintering of consciousness. Also in the works is ZenDeck©, a platform that celebrates the state of oneness of tweeting, chatting, streaming and talking on your headset while driving. It’s a new twist on old tradition, offering unprecedented ability to be fully centered while multitasking.

3. Entertainment as the most important element in social media or web content. I’ll drop the sarcasm for a moment. This Lear Center presentation: makes a great case on the primacy of entertainment. As an aside, this is something that you, Mario, clearly, have tapped into.

I came to this while building co-promotional relationships with external partners. There’s no better way to assess a prospective partner than take a trial run, and see what happens when you encounter the inevitable challenges of starting something new.

My biggest mistakes have resulted from not listening actively enough, and pushing forward on a course that made absolute sense to me. I spent a lot of time in agencies, where rapid ideation, strategy and action are valued – and, for the most part, a tendency toward action plays well as long as you’re aligned with the client contact.

When I went to work within a corporation, gaining consensus and buy-in across functions became crucial. And, in fact, my agency client contacts probably were managing those issues, as I was off tilting at windmills.

If you want to get the right people on the bus, you need buy-in, which requires active listening. Granted, you’ll often encounter program dilution, but you dramatically increase the odds of getting the bus out of the parking lot. Actually, for a year early in my career, I sold buses to school districts throughout the state of Washington — so you can consider my perspective on getting people on the bus as directly from the source.

I’ve already disclosed Second Thought, the marketplace for repurchasing rights to online content that threatens to muddy your reputation . . .

What can you recommend to traditional media practitioners who are playing catch-up to technology?

Keep your chin up and find ways to get more engaged. Media has come a long way, but it continues to change. It’s not going to just stop and let you catch up. So you might as well find a way to step into the stream.

At the same time, don’t give up on your strengths.  Strategic content remains important in Web print and video venues.  The same can be said about strategic promotion in areas like mobile.

Also, I expect the ability to produce or manage creative, strategic content will re-gain currency as traditional media declines — my bet is that web-media consumers will miss both the authority and entertainment we currently take for granted with old media.

Which is not to say that old media will make a comeback. Rather, consumers will gravitate to online sources that feature strategy, review and vetting by critical gatekeepers. We’re currently at a point at which anyone can say anything, anytime. And, unfortunately, they do. Look for a comeback of well-developed content.