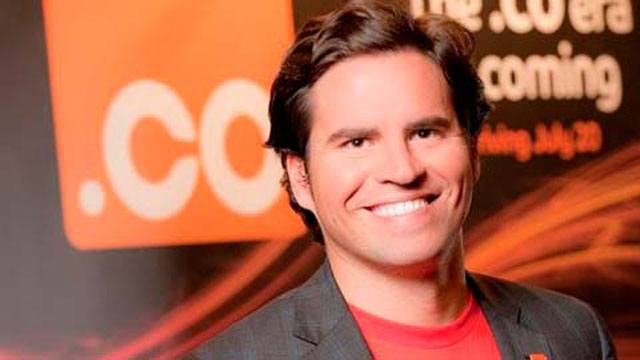 [quote style=”boxed”]Hire the best people you can find, even if you think (or if others tell you) that doing so is overkill. Your business is only limited by the capacity and talent of your hires.[/quote]

Juan Diego Calle, a serial entrepreneur, is the founder and CEO of .CO Internet S.A.S., the company that runs the .CO top-level domain. Under Juan’s leadership, .CO was launched internationally in July of 2010, and has quickly become one of the most successful domain extensions in history, with more than 1.3 million domain names registered by people and companies in 200 countries worldwide.

Attracting the attention of major brands, small businesses and startups alike, .CO has hundreds of thousands of individuals and businesses building or extending their online presences on its platform–including companies like Angel List (Angel.CO),Twitter (which is using T.CO as its official URL shortener), Google (which recently launched G.CO as its official shortcut for all Google products and services) and 500 Startups (500.CO).

At the age of 20, Juan co-founded TeRespondo.com, the largest pay-per-click network in Latin America. The company operated in the U.S., Brazil, Mexico and Argentina, prior to being acquired by Yahoo, Inc. in 2005. Subsequently, Juan founded FederatedTravel.com, a large, global network of premium travel websites, including popular destination sites ParisHotels.com, NewYorkHotels.com and LondonHotels.com, among others.

I’m focused mostly on product development, which is what I love to do. Specifically, we are building a platform to engage startups on .CO and to offer them value way beyond the domain extension.

Where did the idea for .CO come from?

I wish I could take credit for it. However, the idea of launching .CO globally had been discussed since the late ’90s, but for a number of reasons, it didn’t come to fruition until 2010. I suppose that I was in the right place at the right time, and therefore had the opportunity to execute on it.

I wake up at 6:00 a.m., exercise for one hour, have breakfast with my wife and daughter, answer emails from home for an hour, catch up on blogs/news, and get into the office by 9:30 or 10:00. The first thing I do in the office is review data from the previous day, along with project progress. After that, it’s anybody’s guess. Beyond any prescheduled calls and meetings, every day is box of chocolates.

I love building stuff–particularly when it’s stuff that will have an impact on a large number of people. As an entrepreneur, bringing an idea to life is the one thing I’m most passionate about doing. That said, I’m not a programmer, so I rely on my team to execute. I’d like to think that I’m the architect, so I typically sit right next to my team’s programmers to discuss how to build this or that and to literally follow them, step-by-step, so we can fine-tune as we go along. We move in small stages–very small stages. We are actually making it a point to not over-engineer anything or over-build anything until we see how people use our new products or services.

The expansion of top-level domains is really exciting. We’ve been working hard on changing the fabric of the internet, and this expansion will only accelerate things.

I’ve always been self-employed, but at times, being the CEO has its drawbacks. Dealing with things like employment contracts, leases, accounting and taxes is a nightmare for me, but it comes with the job. Fortunately, at .CO we are big enough now that we can rely on great people who love doing that stuff, and they can do it much better than I can.

At .CO I’m pretty happy about how things got started. I learned a lot from my previous businesses and implemented those lessons into the launch of the company in 2010. If I could do anything differently, I would have started to work on some of the things we are doing now from day one. We’d be two years ahead.

Hire the best people you can find, even if you think (or if others tell you) that doing so is overkill. Your business is only limited by the capacity and talent of your hires.

It relates to the point above. I have many faults as a CEO–that’s the problem. The solution is hiring great people who complement those “deficiencies.” You have to be willing to accept what they are and to empower your team members sufficiently so that they make up for those weaknesses. That’s the essence of a team.

Google, Quora and Expedrion. I suppose the first two are obvious. The third was created internally to manage our entire business. Unfortunately, it’s only accessible to the .CO team, but I can tell you that it’s pretty darn awesome.

I read a simple book a while ago called The First Five Minutes. I learned more about business from this book than any other book. I’m sure you can find fancier things to read, but sometimes it’s the simple ones that make the difference.

My two-year-old daughter cracks me up just about every day.

My pops, as corny as it may sound. He’s the greatest entrepreneur I know and have had the privilege to learn from.