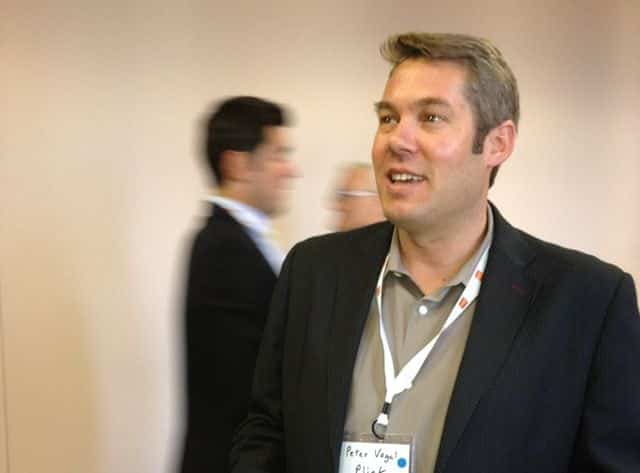 [quote style=”boxed”]We encourage a lot of conversation and questioning. There are no sacred cows. There are no certainties in startups.[/quote]

Peter Vogel is co-founder and CEO of Plink, an online-to-offline loyalty program that rewards members for dining and shopping at their favorite national restaurants and offline stores. He has more than a decade of executive-level, online sales and marketing experience, specializing in performance-based marketing, media buying and monetization of social media. Most recently, Peter was senior director of marketing and industry scout at Adperio, an interactive agency specializing in affiliate marketing, in-game advertising, social gaming monetization, virtual currency and Facebook Credits monetization. At Adperio, he incubated the idea of Plink, co-founded the company and spun it out of the interactive agency in 2011. As a pioneer in CPA-based advertising, Peter was previously co-founder of Memolink.com and led the company’s sales team from 1997 through the mid 2000s, establishing relationships with Fortune 500 advertisers when performance-based advertising was still in its infancy. He received a B.A. in economics from Washington University in St. Louis.

We’re finishing up a redesign of our website, and we’re expanding our rewards catalog to include brands like Amazon, iTunes and Nike. In the beginning, the only reward we offered was Facebook Credits, and all our members were acquired from Facebook social games. Being limited to just Facebook Credits made it difficult to get members from outside social games, because no one else cared about Facebook Credits. Additionally, even our members who came from games were asking for more reward options. Our new, redesigned site and expanded catalog should be up around August 1st, and we’ll be positioned to grow fast. Watch out, world!

Where did the idea for Plink come from?

Adperio, the company who initially incubated Plink, was an online marketing company that acted as an agency of record for companies like Netflix, Experian and Discover Card. Adperio was driving huge volumes of new customers for companies like Netflix, by giving consumers social gaming virtual currencies in exchange for their signing up for free Netflix trials. This was Netflix’s largest source of new member acquisition for four years. We saw what Adperio could do for online brands, but their tracking only worked for online brands and all interactions were completed online. We thought to ourselves, “How could we do this for offline brands? How can we drive people to eat in Taco Bell, track that behavior, and then reward them for their purchases so we can build loyalty and get customers to make purchases again and again and again?” About a year later, Plink was born.

The great thing about a startup, especially when you have six people, is that you do a lot of different things all the time. I personally manage the sales, business development, marketing, investor relations and public relations sides of the business. I’ve had weeks devoted to flying around the country, meeting with potential advertisers, and madly putting together presentations. I’ve also had weeks where I spent 75 percent of my time contacting and meeting with investors. It’s key to be able to fluidly adapt to what the company needs.

Collaboration. Brainstorming. Multiple conversations that start with, “What if we…” or “Are you sure that…” or “I just read this article…” or “So I had a few drinks and…” or “This may sound dumb, but….” We encourage a lot of conversation and questioning. There are no sacred cows. There are no certainties in startups. Once you begin establishing those “certainties” or unchangeable ideas, you have essentially left the world of startups and have become a different kind of company. Not a better or worse company, just a different type of company.

Online-to-offline marketing. More consumers are online than ever before; Facebook will have a billion members by the end of 2012. But close to 90 percent of purchases are still made offline. If you can build a bridge between those online consumers and their offline purchases, you have created something very powerful that motivates and influences billions of dollars in transactions.

I’m not sure if I really hated any of the jobs I’ve had. Maybe I’ve been lucky, but there has been something positive I’ve taken from every job. I had a newspaper route for five years, worked as a busboy, worked at a batting cage as a ballboy, sold magazines via telemarketing, delivered laundry in the boarding school I attended, and made sandwiches in a deli. Then I started selling advertising at my college newspaper, and from that point forward, I never left the sales/business development world.

I make a lot of lists. When you juggle a lot of balls at once, it’s very easy to let a few fall now and then. I keep lists I start every morning, and cross things off as I go. I always have a weekly list. My former boss, David Asseoff, CEO of Adperio, recommended that I make a list of my weekly goals every Sunday, when I’m not in the office. I have found this very helpful. I write down bite-size tasks under a variety of categories–marketing, sales, etc., and then consult that list all week, crossing things off as I go. Every week I do this, I am surprised how many of those items I have forgotten once the business of the week gets going. Without a list, I wouldn’t get many things done. There is something about making that list outside of working hours, over the course of an hour or two, and letting the list get kind of organically made as you remember things that need to get done.

Raising money. It’s a lot harder than most people realize, and takes a lot more time than you think–until you try to do it. My advice to entrepreneurs would be to start trying to raise money much earlier than you think you should, and assume you will be spending 50-75 percent of your time trying to raise money until you raise the money. We did successfully raise an Angel round and are working on a Series A right now, but we did it with help from many people, lots of meetings, lots of travel and many, many presentations. It takes time, work and help from a lot of people. Ask for advice from others who have done it before. If you don’t know anyone who has done it, seek them out in local clubs or find them via online resources or LinkedIn. If you don’t ask for help, you won’t get any help. I can guarantee that.

If anyone learns how to make energy from ice or cold temperatures, they will make a lot of Eskimos happy.

Start Something that Matters by Blake Mycoskie, founder of TOMS Shoes. If this book doesn’t inspire you to “do good” with your business, you probably don’t know how to read.

Gary Vaynerchuk, Dave Kerpen and Ivan Fernandes (@ivan2012), because they are all innovative, digital and social media pioneers whom I admire.

One of my favorite Denver restaurants shut down recently and just reopened in a brand new building. But they haven’t been able to finish their website, so they posted this message: “And check back soon. We’re constructing a new website, but apparently computer stuff takes longer to build out than a stunning 76-seat restaurant in a historic brick building. Who knew?”

There’s a lot of incredibly savvy business and social leaders whom I admire greatly; they are enacting great change in the world. I guess a real hero, to me, is someone who is sacrificing their own success and financial well-being to do some good in the world.

What is your favorite quotation?

“How do I know what I think, until I see what I’ve written?” -Mark Twain

I’m a huge believer in the power of writing and its ability to take you places you hadn’t considered and to help you generate brand new ideas. There is something about putting pen to paper (or even typing) that stimulates parts of your brain, firing neurons across different synapses of your brain. It really stokes the fires of your mind. It’s very powerful stuff. Any time I’m stuck on an idea, I write.

What is a resource you use to learn about best practices in leadership?

I love reading the Corner Office column in Sunday’s New York Times business section. Adam Bryant does a great job eliciting advice and insights from CEOs in all different types of businesses. It’s the first part of the paper I read every Sunday morning.

Who do you think will win the Super Bowl in 2013 and why?