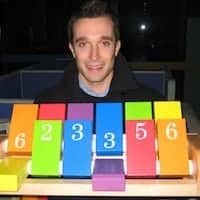 Julien Mayot was born in Lille, France. At age 6, while living in Paris, he started his first business: selling chestnuts! He would send his two sisters collect chestnuts from the trees of his backyard in the heart of Paris. He would then bag them and sell them in the neighborhood, door to door for five francs a bag (around one dollar).

Later on he sold refurbished bicycles, rats to pet shops (raised by his neighbor), cars at a dealership (his first real job when he was 17) and after obtaining a master’s degree at IAE Business School, he left France and came to San Francisco as a web marketing developer, early 2000.

After three months, he started Blue Orange Games from an original board game idea his business partner had: Gobblet.

Julien made 1,000 games, stored in his garage, and hit the road with a beat up jeep Cherokee, going from store to store to show his game. Three months, 22,000 miles, 42 states, 500 stores later, the first 10,000 Gobblet games were sold and Julien was in business and making his first profit.

Ten years later, Gobblet has sold over 1,000,000 pieces and Blue Orange is a multi-million dollar company with a catalog of 30 games that are sold in 15 countries worldwide.

One of our game Spot It! is nominated for “Toy of the Year 2011”. We will get the results at the annual Toy Industry Association ceremony in New York, February 12, 2011.

Past three winners sold millions of copies! We have prepared everything in case we win: 300,000 games are in production right now. If we win we need to
be ready to sell a million games within a year!

Back to basics: simple things are coming back and will never be out of fashion. Spend real time with friends: shut down your TV, your computer and Facebook, call six friends and organize a board game night.

3D prototyping: today you can have an idea and make a prototype for less than a hundred bucks. This is changing the way small companies can get
started, on a small budget. With an internet connection, smartphone and cheap airfares, creating and selling an amazing product has never been easier.

Durability: yes recycled is good, how about products that last? A metal water bottle won’t need to be recycled.

The same way, every product we make is made to be durable so it does not end up in a garbage: we use solid materials such as resin, tin, wood, every game has a lid (so you do not lose parts) or a pouch to keep pieces all together. We print instructions on the game box so you’re always ready to play. And our cardboard boxes are made of recycled cardboard, we plant two trees for every tree used in game construction and we use non-petroleum based plastic for 95% of our plastics (mostly a resin called urea).

We do not test market any of our products. After we test games with few groups of people, we make a few thousand games and they go straight to stores. Only when the product is on the market we know if it’s good or not.

I get inspiration traveling from toy store to toy store. Consumers and store owners give me ideas, that I put into new products. Children are always the most creative and have given me my best business ideas!

Not making enough products to supply the demand. You can have the best idea, if you do not have products on hand when demand is rising, you will lose the momentum and your idea will not succeed. We now take a lot more risks and make lots of products whenever we feel it will be a success. 95% of the time we are wrong, but we need to keep working that way or we won’t hit the jackpot.

Talk to your customers. All the time. Just ask them “how’s business”. If the last time you did that was over a month ago, your business is at risk.

Book: The Tipping Point: it will help you understand why an idea becomes big and how to make it “tip”. The US is a huge, attractive market. The size of it can be scary though and makes it very hard to succeed if your vision is too narrow. Think big!

Tool: quick prototyping is amazing. You can print an object in 3D using a special printer. An average object costs around $100 to print, and it looks like a real product!
Check it out:  http://www.youtube.com/watch?v=PDLOmoQj4H0&feature=related

The founders of Alter Eco USA, Mathieu Senard and Edouard Rollet. Alter Eco is a leading fair trade company based in San Francisco.

What does “Blue Orange” mean?

It’s the planet earth! We got inspired by a poem from Paul Eluard, The Earth is Blue Like an Orange. It is a beautiful surrealist poem, that talks about the planet earth. Our vision is a happy planet, that’s why we create fun board games for everyone.