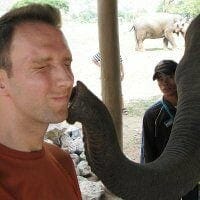 Karol Gajda quit his last day job 10 years ago and now inspires others to live extraordinary lives of freedom through his writing. He is currently living anywhere and everywhere (with just one small backpack in tow), moving to new cities/countries every few months to experience new places, people, and things. When not figuring out how to rent an apartment in a random city for 2 months or learning about local vegan cuisine he spends his time reading, and playing the guitar.

I’m in the planning stages of a top secret tour of the United States next year. It’s not so top secret that nobody knows about it, but it’s top secret enough to where the website and logistics haven’t been hammered out.

I can share a business lesson from this project though: persistence. The domain name for this project was owned by somebody for 9 years before I bought it. I first contacted the owner more than a year ago asking if I could buy. He didn’t want to sell. I contacted him again a few months later. He still didn’t want to sell. Then I contacted him again a few months ago and he said “make me an offer.” Any good negotiator knows not to make the first offer. I didn’t. His first offer was 50% lower than what I would have offered and I bought the domain immediately.

That’s a great question. I don’t really follow trends. Blogging was a trend and I’m absolutely thrilled to be able to write for a living, but it has been around long enough that I don’t know if it qualifies as a current trend.

The problem with trends is that you can make money with them, but you’ll always be chasing. I don’t like to chase.

Business doesn’t change a whole lot. What worked 100 years ago works today, albeit in a slightly different capacity. It all boils down to giving people what they want. If you do that consistently trends don’t matter.

Or, in the words of Phil Anselmo: “The trend is dead.”

It depends on the idea. Most of my ideas come from my surroundings, reading, thinking, and paying attention to my fantastic audience.

What has inspiring me a lot lately is all the wonderful e-mails I’ve been receiving. It used to be that they’d come in every once in a while, but now I’m getting them daily. It’s incredibly inspiring to know when you affect someone’s life in a thoroughly positive way.

In addition to that, and I’ll bet a lot of people give this answer, music inspires me. Listening to it and playing it. Music can put me in such an intense zone that it’s almost like I’m not controlling my brain and the ideas flow.

One of my biggest mistakes was staying in an institution (University) designed to brainwash the masses and create followers not leaders. If I had to choose one regret it would be those wasted years. What I learned most from it is that when I feel something strongly in my heart I need to follow it, even if it’s a difficult decision and goes against the norm.

Show your audience your true self, flaws and all. They will connect with you on more than just a superficial level and become raving fans instead of bystanders.

In alignment with that, don’t be afraid if your ideas are not mainstream. You don’t need the mainstream to connect with you to be successful. You do need a group of passionate people who will go to great lengths to follow what you’re doing.

I don’t re-read many books so there isn’t something I use to inspire myself to bring an idea to life. That said, I read a lot, and have recently been inspired by The Power of Now. A lot of it is really esoteric and not easy to grasp, but the basic premise is something I live and breathe. Too many of us focus on what happened or worry about what will happen instead of what’s happening right now.

Derek Sivers. His point of view never fails to get me thinking.

If you had to give somebody new to the Internet economy a single tip what would it be?

Find a way to not only connect with your audience, but to consistently follow up with them and give them what they want. The easiest way to do that is with an e-mail list. Connecting through a blog is all well and good, but connecting via good old fashioned e-mail is still the way to go.

What prompted your veganism?

It’s an incredibly healthy way of life that is respectful to humans, the planet, and other living beings. Respect the world and it respects you.