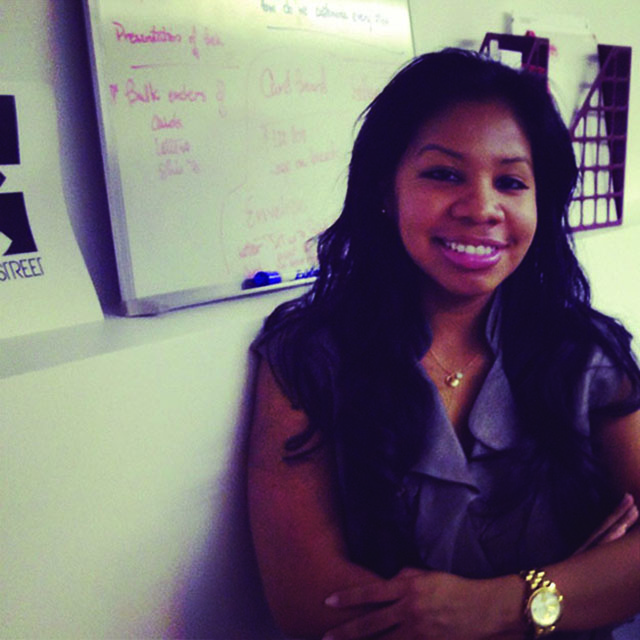 [quote style=”boxed”]Keep an organizer and organize your day. I like to plan my day and time allocation – it helps me stay on track. You get into this behavioral pattern where if you’re not deleting items from the list you actually feel bad.[/quote]

Keisha DePaz is CEO and Founder of Punch Street, a greeting card startup focused on embracing young adult and teen life. Punch Street offers vibrant greeting cards aimed at teen parenting, anti-bullying, and incarceration to colorful Invitations, Announcements and more. Of Belizean descent, Keisha arrived to the United States when she was just nine years old. Keisha graduated high school at 16 and went on to attend S.U.N.Y. Stony Brook where she graduated Phi Beta Kappa and Golden Key with a B.A. in Psychology and a minor in Women’s Studies. After college, Keisha attended St. John’s University, School of Law on scholarship where she eventually became Senior Articles Editor of the prestigious St. John’s Law Review and the Journal of Catholic Legal Studies. A young practicing lawyer for almost 5 years at a top 40 U.S. law firm, Keisha’s life took an abrupt turn after watching an episode of the gritty HBO crime and drama series, “The Wire.” The show was a catalyst to Keisha’s vision for empowering the Youth with her colorful street style cards. Hard at work from the ground up – literally – she has started in her parents’ basement – Keisha is working diligently on Punch Street and it’s mission to embrace young life.

We recently launched in January of this year, so, we are adjusting to this new phase in terms of the website, the ordering and fulfillment process and really just trying to generate market awareness of the brand so that customers know we exist.

Where did the idea for Punch Street come from?

I was actually watching “The Wire” on DVD one day after work. It was late 2010 and I was up to season two. One of the street boys in the show, Bodie, was looking for funeral flowers. He was not pleased with the regularly arranged flowers in the shop. A flower shop employee brings him to the back of the shop where they had the most uniquely arranged flowers – more representative of his street life – flowers in the shape of a BMW sign, a cell phone and an R.I.P. sign. The young character was ecstatic and the little writer in me thought to myself “well – he’s going to need a street style card to go with those flowers.”

That was the first thought that I had about writing and designing greeting cards.

Up at about 5:30 – 6:00am, 10 minutes of meditation, exercise on a treadmill while checking and answering emails. I’m officially at my desk at about 8am and it’s straight to working on matters with the website, designing and handling other designer emails, marketing, and even processing orders. There are many hats to wear as startup founder.

I keep a notebook where I jot down ideas. I scribble and draw details of how a particular design is supposed to look and what it’s supposed to embody. I also read the news to find out what’s relevant in our community. What is my generation up to? It has a great impact on my cards. We incorporate so much of our American culture into our products. The cards aren’t used as just a nicety. They are really supposed to represent purchaser and recipient. As for inspiration, I like getting inspiration from just about anywhere – a graffiti haven like 5 Pointz in Long Island City, Queens, fashion, music, social media even. There is inspiration for me everywhere.

Two things: Instagram – because I believe it ties in technology with real products when we snap our cameras to capture real things that make us happy. Second – anything bling. I want Swarvorski, charms and bedazzle all over my greeting cards. My generation loves this trend.

When I was about 16, I worked for an old couple in their home doing real estate work. The house was a mess, the work flow was disorganized and I never got paid on time but they were the sweetest couple that really wanted to do a good job in their profession. I learned that sometimes it’s not about working under the most ideal circumstances if you make real connections and like what you are doing.

Probably try to launch quicker. We worked really hard on a customized website only to face many developer issues. They ended up running off and leaving us empty handed after months invested. There was a lot of lost time and money. We ended up simplifying the site and coming out with core products only. But all mistakes lead to experience so I don’t regret any of my previous steps.

Keep an organizer and organize your day. I like to plan my day and time allocation – it helps me stay on track. You get into this behavioral pattern where if you’re not deleting items from the list you actually feel bad.

I mistakenly relied on an extremely smart friend to work with us but that person was not very loyal to the grind or the company mission. I knew it and thought the person would eventually come around if they saw how much everyone else was committed but they never came around. In the end this person ended up leaving the team during a particularly difficult time. That impacted the other team members’ morale and I was left with the pieces. The lesson there is that you’re not only looking for A players but players who are loyal to the cause and care about what you are doing.

We would love to partner up with the right non-profit when the time is right. We have so much meaning behind what we are doing – which is to use our colorful little greeting cards to represent and embrace teen and young adult realities in a way that is not on the market. We believe with the right non-profit we can complement each other’s services.

I would create more respectable jobs catered for women. I have an interesting theory that reporting on women’s advancements is skewed because in the end it comes down to money. Our money is either too easy or too hard to come by. Plus despite high school enrollment and graduation numbers, we are pushed into either low paying careers overly saturated with other women or we have to break down walls, barriers, ceilings and glasses to get high recognition and pay with the boys. Tackling this problem is important for the opportunities available to the next generation of boys and girls.

The characters that played Omar and Rhonda Pearlman from The Wire retweeted an article about how Punch Street was inspired by the show. It was a highlight for us and we pinned up the picture of the tweets on our desk! We would LOVE if the entire cast and crew knew the trickle effects of what a really good and meaningful show can do.

Google Alerts to find out what’s being written about me or my company. Twitter, Facebook and Instagram for their amazing networking reach on a budget. The Pulse app because I’m able to read a multitude of news sources quickly on one platform.

You Are Not So Smart by David McRaney because it highlights how self delusional we are when it comes to perceiving, judging and more.

@CindyGallop: I have learned more from her tweets and RTs than from searching the internet for relevant news
@GenerationMeh: She sarcastically tweets and reports on Generation Y issues
@PUNCHSTREET: Shameless plug because we are the coolest greeting card startup!

When my brother came up with a valuation of our startup company! Funny. Not funny.

My parents; both of them at different periods in my life. I hope I end up being half of any one of them.

How did you choose the name Punch Street for a greeting company – sounds pretty scary?

I actually wanted the name Punch Cards because I wanted a word that expressed “knock out” or “delivering with vigor” but that name was taken. So I came up with Punch Street to describe an imaginary bold and vibrant place where our culture is embraced. Just as you are programmed to think of bankers when you hear Wall Street or little kids when you hear Sesame Street, I want people to think young adults and teens when they hear Punch Street. I think the word actually fits better with the spirit of the brand because we are really trying to create a creative safe haven on our website.

Name one person who surprised you in the past year.

My brother. He’s come such a long way personally and professionally. I’m sometimes very demanding and bull headish to work with but he deals with me. I’d like to think that I pushed him to be better but I think that he deserves all the credit for his growth. He’s my partner on this risky journey.