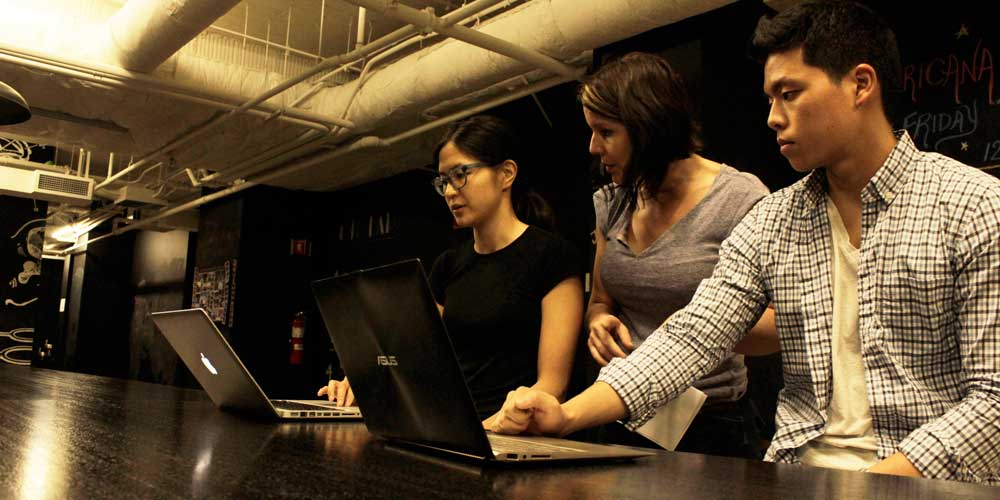 Testing multiple ideas, expecting that all will fail, but hoping one will catch on. Whichever gets more traction is usually then pursued.

Kevin Yun is founder and CEO of DESIGNATION Labs, an immersive UX/UI design bootcamp in Chicago and St. Louis. Kevin finds it weird to talk in the third person but will try his best to fill this 200 word bio. Kevin attended the University of Illinois at Urbana-Champaign studying finance, but really spent 4 years trying to build startup companies with friends. Kevin started his career in tech by having no skills whatsoever so decided to learn HTML and CSS one day, in order to gain the respect of the smart guys around him. Eventually, Kevin took on all the design duties for the startups he was in, and found he really enjoyed the whole front-end process. After a couple of ventures and failures here and there, a company called DESIGNATION caught on. Kevin now works together with an awesome team to help aspiring designers break into technology, and hopefully change the landscape of higher education in design.

Since Kevin still needs to fill out 30 more words for this bio, I guess he will now be telling you more about DESIGNATION. DESIGNATION is the original design bootcamp. A 16 week-long program (4 being virtual), DESIGNATION is for aspiring mid-to-entry level designers. 93% of our alumni go on to get great new design jobs.

Where did the idea for DESIGNATION come from?

The new model of a brick-and-mortar coding bootcamp was just about taking off, and there were only a couple of companies teaching people in-person how to code. The idea was to apply the model of a coding bootcamp to UX and UI design, which meant intense/immersive education and post-graduate job assistance and placement. Our bet was that companies would need help looking for junior-to-mid level UX/UI design talent, the same way development bootcamps solved the need of junior developers.

Every day starts with a morning stand-up with the team, where we cover what we did and what we want to do for that day. From then on, every day looks a bit different. Some days will just be getting logistical/administrative work out of the way and fixing technical bugs in software. Other days are spent syncing with various team members on whatever’s the priority for the week. We add metrics to everything and treat weeks as project sprints to measure our productivity.

Testing multiple ideas, expecting that all will fail, but hoping one will catch on. Whichever gets more traction is usually then pursued.

A lot of the innovative stuff happening in technology right. Self-driving cars, wireless charging, augmented/virtual reality, and internet of things are so exciting. We’re truly living in an age of the future.

I’ve always been a pretty organized person. When you’re growing a venture, it really helps to implement systems of processes. Especially as a brick-and-mortar business, organized documentation is huge. A phrase we throw around here a lot is, “If you got hit by a bus tomorrow, would another person be able to come in and continue your job?”

I’ve interned at a couple of small boutique finance firms. I can’t say they were the worst, but they definitely shed light on the path I wanted to take in life.

To be honest, I don’t know. Perhaps changing our starting location in Chicago? But even then, probably not. I feel lucky to have grown up in Chicago. If I grew up in San Francisco or New York, this business definitely would not have been viable, as rent expenses out there are pretty hefty.

A couple of things: take everyone’s advice into consideration, but couple that with your gut and experiences. Look out for causation vs correlation. Be relentless and persistent in your ventures, and friendly to everyone.

Optimizing productivity and taking shortcuts: working smarter, not harder. Most of the time this meant working harder, burning the midnight oil, and keeping your head down to get the work done — a ton of grunt work.

I was working with a team of buddies and we had a startup based on a mobile fitness consumer app. It was good times and we got some seed funding in the summer to take our venture further along. Eventually, co-founder issues gave way, and I ended up leaving the company. As a junior in college with nothing going for him, that was total failure. I then put my head down, dove right into four ventures, and the one that worked the most was DESIGNATION.

Wireless earbuds. Fortunately (or unfortunately, depending on the way you look at it), there are already people who have started to solve this [first world] problem. It’s awesome to see technology keep progressing.

We use Google Business Apps (Gmail, Drive, Calendar, G+), Trello, Infusionsoft, Zapier, HelloSign, Rapportive, Slack, and Typeform. They are all incredible services, and help us tremendously in working faster and smarter.

The Halo Effect. This book changed my outlook on life. TL;DR: There is no absolute answer to anything. People succeed or fail for different reasons based on different circumstances.