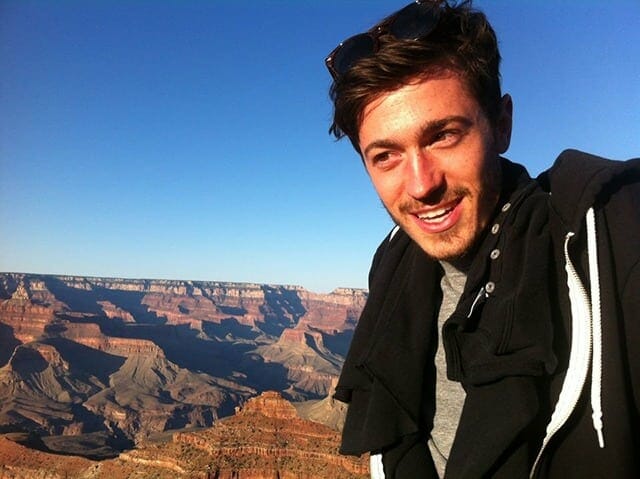 [quote style=”boxed”]I recently got into meditation and would highly recommend it to other entrepreneurs. It helps clear your mind and let good ideas flow. It relieves stress and helps focus more than a cup of coffee.[/quote]

Myke Armstrong is an Internet entrepreneur and futurist. He began making websites at age 13 when the commercial Internet was just gaining traction. He built websites for local bands in Middle School and in High School was working with major label artists. He started two e-commerce companies and was featured in Wired, Maxim & EGM.

He is a designer and is passionate about creating beautiful user experiences while solving simple problems. His current project Tapshare, a social photo sharing app which lets multiple people add photos to a single photo album, has attracted the attention of mainstream bands and artists.

Myke dreams big and loves to ponder the future. He believes we are at the beginning of a technological revolution and is excited to be a part of it.

I’m currently working on a project called Tapshare, which lets people create group photo albums using their mobile device.  We found people at parties and events taking a lot of photos, but weren’t sharing them with each other, so we made Tapshare to let people easily create collective photo albums in the cloud.

Where did the idea for Tapshare come from?

The idea built itself. We set out to make people more connected at parties and events. It started as a geolocation based contact manager, then it turned into a geolocation based photo album and finally pivoted to group photo albums. We would give the app to all our friends to use. We saw what stuck and moved forward in that direction.

We sell photo collections, postcards and end of the year photo books — like year books for grownups — which contain all the photo albums you created over the year.

I enjoy waking up early, but that’s not always how it works out. After I wake up, I meditate for 20 minutes. This grounds me and focuses my mind for the day. After that, I workout or do yoga for an hour. This helps counter the bad habit of sitting in front of a computer all day. Then, I’ll eat breakfast, make tea and check my emails. For Tapshare, I use a todo app called Omnifocus to see what tasks need to get done. I dedicate one day a week for meetings, one for marketing and the rest for product. In the evening, I go over my tasks for tomorrow, which helps greatly to get to work right away the next day. Before I go to bed, I write in my journal to get any floating thoughts out of my head.

When I come up with an idea, I tell as many people as possible. I will tell complete strangers and see their reaction. The majority of my ideas don’t get past this stage. You can quickly tell how good an idea is by how excited people get when you tell them. Ideas are like rough stones. The more you think about them, talk about them, and build simple versions, the more chiseled and polished it becomes.

The trend that excites me most is intelligent technology. I think we’re just at the beginning of an incredibly interesting journey. Right now, we are able to talk with technology, verbally, and have it respond. If you told this to people a thousand years ago, they would think it was magic! Our cars are about to start driving us places. We are building artificial brains & and a complex virtual networks of billions of humans. The exciting part is that everything we build is layered on top of what we currently have. Siri is just the beginning!

The worst job I had was making pizzas. My skin, hair and clothes smelled like garlic and pepperoni every day of the week. After I got off work, we were allowed to make ourselves a personal pan pizza and I loved experimenting with the different toppings and sauces. I learned to make some pretty delicious pizzas!

I would bring more people on board early on. I would always have a co-founder. I would find advisors and I would get mentors as soon as I found an industry that interested me. I would move on more quickly from dead end projects that weren’t making me happy. Most importantly, I would create more relationships and learn from others who have done it before me.

I recently got into meditation and would highly recommend it to other entrepreneurs. It helps clear your mind and let good ideas flow. It relieves stress and helps focus more than a cup of coffee. I’m thoroughly convinced meditation can cure ADD. The idea is to sit down and close your eyes for 20 minutes. There are many different techniques you can research, but simply spending 20 minutes with your mind is a great start, and a great discipline.

I’ve had many failures. I’ve started many companies that didn’t go anywhere. To quote Aaliyah, “dust yourself off and try again.” It’s that easy. Recognize when it’s not working and move on with gained knowledge.

I would change our culture’s focus on materialism to relationships. People are more worried about the latest celebrity gossip than their next door neighbor. Burning Man is a great example of a reinvented culture. Tony Hsieh is working on a culture reinvention in Downtown Vegas which excites me greatly.

When I was in Middle School, I saved someone’s life I never met. We had been talking for a few months on AOL. She was suffering from depression and she took an overdose of pills one night. Her writing got sloppy and stopped. I went into an AOL customer support chatroom and gave them the details. They contacted her local police, they brought an ambulance to her house, found her passed and and pumped her stomach. She ended up living and called me the next day from the hospital. She’s married now and has 2 kids.

Wikipedia is a brilliant collection of human knowledge and I think it will go down as one of the greatest inventions of our time. Group messaging on the iPhone has changed the way I communicate with people. It adds a new dimension to conversations which I don’t think gets the recognition it deserves. ODesk is another great tool. If you have an idea, it’s likely you can find someone around the world to make an MVP for the cost of a dinner or two.

Delivering Happiness by Tony Hsieh. This book helped me realize you can create a company and also a culture which fosters happiness and strengthens relationships — it’s not just about making money!

I just watched a video of a hawk swoop down and pick up a toddler. It couldn’t carry the weight and dropped it after a couple feet. The toddler was fine, and I shouldn’t have laughed, but boy did it give me a chuckle.

Benjamin Franklin. What an amazing life. He helped found the United States and harness electricity. He created the first US hospital and first US library. He had an amazingly diverse, fruitful life which changed the course of humanity.

What is something few people talk about when launching a new project?

There is a moment just after you launch something that is rarely talked about. I call it the calm after the storm. You spend months building. You prepare for weeks to launch. You launch it to a great hoorah. A storm of excitement. Then, there is this calm. People aren’t simply flocking to your website or app. This harsh reality sets in that this is just the beginning. The ride isn’t over, you just got on and you will be launching and relaunching every single day. If you’re not aware of this in advance, the calm after the storm can be a downer!

What life advice would you like to leave us with?

Never forget you’re alive. There are so many distractions every day that it’s easy to forget you’re alive in the first place. Take a moment and take two deep breaths. Slow down. We are all sitting on a big ball, which is floating in space, surrounded by the great unknown. Take time to appreciate the people around you. Go out of your way to do this every day.