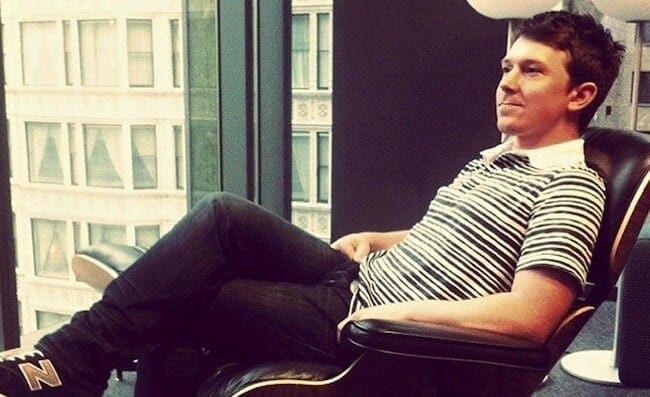 Patrick Algrim is a Product Designer from Chicago, Illinois. A true digital kid at heart. Started to design and create small Web sites in fifth grade. The process came about fairly quickly when he asked family members how to create one. When no single person seemed to know how he became intrigued. Soon after picking up an HTML book from Borders and got started. He keeps that book as his shrine to this very day.

Patrick continued to create Web sites throughout high school, being paid his first $500 by a small business during his Freshman year. Created his first business while in college that became a small design studio where he had the opportunity to work on some incredible projects by some fantastic people. That company had part in helping build the business’ of companies like Groupon, Threadless, Fast Company and more.

Now Patrick sets his sights on taking his experimental attitude to the seemingly untested parts of our world, media and content online.

Currently I’m working on MyZeus. It’s a product set forth to make finding a movie just as much fun as actually watching it. We want to use the world around you to help you discover new movies that either match with your lifestyle or are the complete opposite (your choice). At its core it’s using an anti-algorithmic approach to helping you find new content by targeting and recycling the information you’ve already publicized about yourself online.

Where did the idea for MyZeus come from?

The idea for MyZeus came from the intrigue of wanting to watch a film that looked similar to world we observed outside our window. It seemed simple at the time but we’re still actively making this a reality.

Much like many entrepreneurs my day consists of early mornings, late nights, phone calls, emails, git pushing and pulling, multiple iced coffees, hot coffees, teas and craft beers. A lot of work being accomplished in very odd formats throughout mostly distracting days. But I think that’s great, whenever I catch myself doing the same thing all day for 10 hours straight I get really scared and want to switch it up.

On the right days I’m up early and in bed on time. I work best on any product early in the morning right after my coffee jolts. Ideas and progress seem to happen with quality for me in the morning, I’m not sure why. In the afternoon I begin to crash and snack. At that point I take a little break and do something that progresses my mind or body (workout, read a book, etc.). At nights I often turn on a movie and continue my pursuit.

That’s a difficult question to answer. If I really had to think about it, I bring ideas to life by solving every problem incrementally. If you look at a problem as a 20 step process, I often times solve one step at a time until it’s eventually solved. That doesn’t sound too efficient but entrepreneurs will know that we often have more than one problem on our plate at a time. Whether it’s a new feature, having a meeting with your attorney or doing your laundry. Do your whites today and your colors tomorrow. The point is that it’s physically impossible to solve every problem that you or anyone might have. But if everyday you work toward solving them, in theory your making effective progress.

Sounds simple but style amongst men is becoming masculine again. 50 years ago knowing how to dress yourself was the epitome of masculinity and with the blue jean generation that seemed to change dramatically. I think there’s immense opportunity in exclusive and stylistic products.

**The trend of simplicity.**

I’m constantly excited when people understand they’re seeking to solve big problems with simple solutions. Less of a trend and seemingly more of an evolution. But to me this shows intellectual thinking by mentally spreading 100 options out on a table and finding small connections to make new conclusions. I feel like that’s the process of real discovery. Maybe similar to the simplicity of Franklin flying his kite in the thunderstorm.

I’m excited that more people I’ve encountered are trying to learn as much as possible as quickly as possible. The only oxymoronic opportunity to this is that this same person could miss the style side. In my opinion it’s easy to displace speed with quality on the scale of productivity.

The worst job I had was working as a telemarketer for a car insurance agency in high school. It taught me how to pick up the phone but also jaded me. The reactions I often received were as you could imagine. Extremely negative and often times very vulgar. Occasionally I would get the 95-year-old man who wanted to tell me about “his days” without car insurance when gas cost five cents a gallon, thinking back on it I actually cherished those phone calls the most.

Start finer, as in more incrementally and focus on very precise markets with the simple opportunity staring at you in the face. I don’t think these ideas present themselves often. But I think when you have one that seems so obvious, you should try. MyZeus is attempting to solve a larger problem and focus on a bigger vision. But there’s plenty of smaller problems we face everyday I’d love to see solved.

Note to readers: I do not to advocate the uneducated decision of this next topic. But I would strongly suggest more entrepreneurs to start business’ as soon as possible (in high school, in college, etc.). I’ve met some people who have already started successful business’ in high school and that blows me away. I continue to believe that you can learn more through experiences than through schooling and I don’t think many will doubt that. If you happen to leave school because your business is doing so well – don’t look back.

As a small child I almost drowned at a public swimming pool. I was young, just learning how to swim and lost my grasp of the edge. If it wasn’t for an unknown stranger who miraculously dived in I might not be having this interview today.

I’ve always wanted to create a product that measured if I had good or bad clients when I was running my design studio. There’s so much measurement a client has against the company they’ve hired. Often starting a consulting business you learn quickly how to avoid good and bad clients to produce better work. I want something that tells me, “Hey, this client has sent you 15 emails, 27 Basecamp messages and 42 dropbox files in the past 48 hours – you decide if this is worth your time.” It could help people identify in less time what a good or bad client is and how much money is being spent managing them.

Beck: On a Backwards River. The story of Beck the musical artist. While he’s never officially shared his upbringing this book talks about his unique perspective on life after having a somewhat close relationship with Andy Warhol through his aunt and having to educate himself as a child by reading books in a library. Beck is one of the most intelligent people when you take the time to listen to what he has to say.

If you weren’t working on MyZeus, what would you be doing?

Helping other business’ with their products. I love the process of creation. It keeps me going. I love solving problems, big and small. Although if I had to completely remove myself from the tech industry I could see myself working in parts of the music and fashion industry.

@iA – Oliver is one of the most intelligent people I know, who thinks deeply about every detail. His updates are constant education and spotlight.
@brandon_weiss – The co-founder to MyZeus and good friend of mine. Frequently tweets educational and nerdtastic sweet tweets.
@qwikster – Always funny to get stung by a bee.

I frequently laugh at my family members or my nieces. Watching a two-year old run off to the bathroom suddenly for a “tinkle” is one of the most humorous and cute things I’ve ever seen.

Without a doubt Oliver Richenstein.