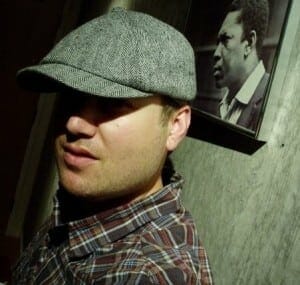 Born three weeks overdue and weighing in at nearly 10lbs at birth, Ryan made a big impact early on, giving his poor mother nearly 24 hours of intense labor. Since then, Ryan has worked hard to maintain that kind of intensity in most all that he does.

Residing in Portland, Oregon, with his beautiful wife, Jeana, and their two cats: Billie & Ella – Ryan has an affinity for Stumptown coffee, Northwest brewed IPA, live music, backpacking in the wilderness, travel, and most of all, spending time with friends.

In the business arena, Ryan has toiled away as a marketing pro in various capacities for several years, until realizing that online/digital marketing strategy and public relations are where his powers truly manifest. This often involves offering his talent to the wild world of entertainment and music, although he has been known to freelance from time to time, executing some dynamite PR campaigns for a wide range of clients. Ryan’s campaigns have landed in publications such as The New York Times, Wall Street Journal, USA Today, The Oregonian, The Los Angeles Times, NPR, SPIN Magazine, Advertising Age, Magnet Magazine, Under the Radar, OPB, MTV.com, CNN.com, Forbes.com, Largeheartedboy.com, Pampelmoose.com, and many more.

Currently, Ryan is working for The Dandy Warhols as the Label Manager for their Portland, Oregon-based indie label, Beat The World Records. Oh, and he’s got his own little boutique PR and Digital Strategy agency too…and a his own little record label too. The man never sleeps.

Right now seems like the most dynamic, fluid, and opportunistic time of my life. I live in Portland, Oregon, which honestly has more creative, artistic and cultural juices flowing than nearly anywhere else in the world. It’s truly a special time to live in such a unique and thriving city. It’s something akin to living in Florence during the renaissance period…especially for the DIY, independent music community.

I’m most excited about pouring my heart and soul into the Northwest music scene. From working with The Dandy Warhols and their label, Beat The World Records, to launching my own little record label (Timber Carnival Records), and in helping independent artists and musicians make sense of the ever changing world of online marketing and digital strategy. I only wish there were more hours in the day to devote to this stuff, so I could help more artists and make a bigger impact on things.

In a nutshell, the music industry is upside down right now and no one knows what’s going on. It’s as if the crazies are running the hospital and the only rule is that there aren’t any rules. Old, seasoned industry veterans are having the hardest time adapting, because the entire economy that they built their lives and careers on is bankrupt. If you want to survive, you literally must question everything and regularly take risks and try things that nobody has ever tried before.  I sort of feel like Lewis and Clark…boldly heading off into the unknown, seeking something better. (I just hope I don’t run out of food like they did and end up eating a horse.)

Nachos really excite me. But I imagine you’re looking for a better answer than that, aren’t you?

Social media is exciting to me because it is really connecting people and communities in ways that has never been possible before in the history of humankind. The power to share ideas and thoughts, express feelings, make choices, and participate in community are aspects that are especially exciting to me. We’re only seeing the tip of the iceberg today. My crystal ball tells me that as mobile technology improves, we’ll get to a point where everyone is literally two degrees from everyone else in the world. And I don’t mean that only in theory…but literally.

Of course, music excites me too. Unfortunately, too many people are hung up on the challenges currently presented in monetizing things (ie: making money from selling records and CDs). Instead, I believe the focus should be on the fact that more people are listening to more music than ever before in the history of the world. This proves to me that demand is there. People WANT music. We (the industry) have simply lacked the creativity and innovation to turn that demand into a better, tangible reward. But there is hope… I mean, people used to believe the world to be flat, right? The music industry is very similar. Changing old perceptions and reimagining the future will be the biggest catalyst to success.

I often bring ideas to life by first exploring them with real, person-to-person dialog and participation with others. Talking through and working through ideas with other people who have similar (or even opposing) interests or interesting perspectives on things is really helpful to me. It allows me to explore new avenues and take a few tangents that I may not have otherwise had visibility or awareness too.

Too many people live on islands and are resigned to believing what they believe because it’s what they were told or it’s all that they’ve ever known. I enjoy being a heretic. Challenging the status quo and asking “why” is something that can be extremely fruitful, when applied in an appropriate and productive manner. However, it can also be counter-productive too. It’s very much a two sided sword in that way. Many things in life are.

I’m also a big fan of the “continual improvement” model. I prefer to approach ideas and projects, no matter how tried and true they may be, as if they’re always a prototype or a beta test of some kind, with plenty of opportunity for growth, learning and improvement. Once you get too comfortable or rely too heavily on a perceived success or a perceived truth, you begin to lose a sense of creativity and objectivity. Unless you are dealing with real absolutes like math and many aspects of science, keeping an open mind and questioning perceived truths can really spawn creativity, innovation and ingenuity. Keeping things fresh and maintaining an open mind really helps bring ideas to life. Google seems to have done quite well with this approach.

What does the future of the music industry look like?

No one really knows what the future of the music industry looks like. But I can tell you with a high degree of certainty that it looks nothing like what we have today and will soon make everything we’ve had up until now look like the stone age.

From a music consumption standpoint, I believe the Spotify model will eventually trump what iTunes is currently doing. Physically owning music, in terms of possessing a physical, digitally tangible object will soon be obsolete. Subscription services are the future…and they key to their success lies in how well it develops and integrates with mobile technology. It’s quite simple, really. It will be very much like paying monthly for your cellular phone service or your cable television service or your gym membership – only it’s music. Once someone effectively ties this into mobile technology, where you can pay $x to have all of the music you want with you and available, on demand, all of the time – the game will be over. Over meaning that that I believe that whomever is the first to master that technology will win the game. iTunes current model is more or less a stop-gap solution during this in between time. It will be interesting to see how well iTunes evolves and develops their platform to compete in the future. I certainly wouldn’t bet against Apple… unless maybe Google was in the game.

How are smaller, up-and-coming independent artists going to economically succeed in the music industry of the future?

First of all, independent artists need to learn to adapt better and faster than their peers. Too many artists are resigned to the old philosophy that they “just want to make music” and aren’t interested in or don’t have time to keep up with technology, social media, online marketing, etc. It’s almost as if artists still believe that simply making really good music is enough, all by itself, to succeed.

Musicians, as much as anyone in any business, trade or industry, need to stay up on the latest technologies and innovations that are taking place today. If you simply stay in your basement or a recording studio all of the time and expect to make a record that is so good that everyone will automatically buy it – because it’s so good – you would be better served to give up now, before you waste your time and money.

Unless you make music purely for the artistic experience and artistic merit of it, than you must get your head in the game and learn how to market and evangelize your music in today’s economy of Web 2.0, social media and digital strategy.

Honestly, I believe independent artists should plan to allocate half of their time to things like planning, strategy, social media, fan/tribe development, connecting with and participating with fans and community, online marketing, etc. And if you do the math, that leaves approximately half of your time to make music and perform. However, in today’s world there’s just no other way to succeed. And while many artists will bury their heads in the sand and cling to the old way of doing things, fearing the unknown or dreading the learning curve involved with unknown buzz words like “Twitter” and “Facebook” and “Digital Content”, “Blogging”, etc…the few brave and hard working artists that embrace this approach will be positioned best to succeed. There a lot of brilliant ideas and resources available right now – especially on the web. Some that quickly come to mind are Trent Reznor of Nine Inch Nails fame, Dave Allen of Pampelmoose.com, Ian Rogers and Topspin Media, Kevin Breuner at CD Baby, and companies like Spotify, Bandcamp, CD Baby, TuneCore, Topspin Media. There’s a wealth of information available out there. And like G.I. Joe used to say… “Knowing is half the battle.”