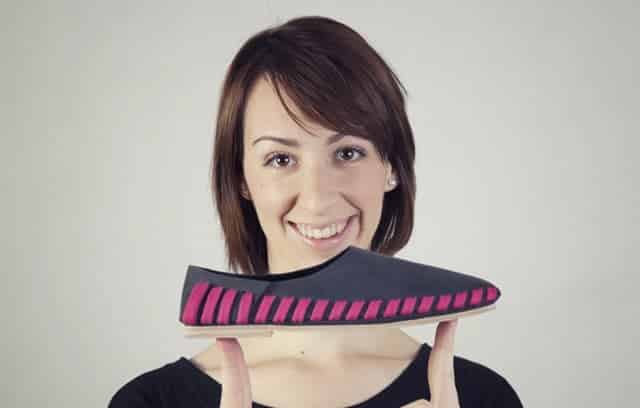 [quote style=”boxed”]Hard work will always pay off. You have to believe that if you put a great amount of time and effort in something, sooner or later you will see the results.[/quote]

Sara Gulyas is a Hungarian designer with a passion for shoes. She graduated as a leather-designer from the Moholy-Nagy University of Art and Design in Budapest and studied also in Barcelona for six months during her postgraduate studies. She has been designing with leather for over 10 years and her work has been featured in galleries in Paris, Prague, Leipzig and Budapest. After experimenting with footwear for a long time, she wanted to create a shoe with the minimal amount of material that would make the wearer part of the shoe making process. The result was a a flat-packed do-it-yourself shoe named Pikkpack (a Hungarian play on words meaning “piece of cake”). Sara and her team launched a Kickstarter campaign in early May to secure a sufficient fund for the first product line of Pikkpack and the campaign has been successfully funded. Now, Sara and her team is working on the aftermath of the campaign and on establishing an international business. The shoes have also been selected to participate in a product design tradeshow in London that took place this spring. Besides designing, she worked as an art manager for more than a year in the framework of the Hungarian WAMP design market. She is really interested in sustainable design and as a designer she truly believes that her profession has a significant role in shaping the future.

Where did the idea for Pikkpack come from?

Our idea and product is called Pikkpack, which is an easy style flat-packed shoe made of high quality 100% leather upper and sole. The shoes are cut from only one piece of leather and the soles are sewn by hand. Pikkpack can be assembled by the customer with different colored cotton laces.

Pikkpack Shoes started as an university project with the inspiration coming from an old Hungarian shoe called bocskor (pronounced: “BOTCH-core” ) which was made from one single piece of leather. While on vacation in San Francisco, Sara wore the very first pair of Pikkpack shoes. As she was exploring the city, stranger after stranger stopped her to ask where she had bought her stylish footwear. After attracting countless admirers, she decided she needed to share her design with the world.

I work on my laptop almost all day long but try to have recharging breaks in every three hours. Listening to music really helps me and before I go to bed I always put together my schedule for the next day.

I’m constantly experimenting and researching. When it turns out that an idea has more potential in it, I delve into the details.

I’m really interested in foldabilty and modularity in design. Eco-conscious design and sustainability are also important trends that I find very challenging and exciting.

The followings are rather characteristics than habits, but i would say three main things: perfectionism, toughness and an alway positive worldview of mine.

Few years ago I worked as a hostess and the leadership consisted of people who didn’t have the faintest idea how to deal with people and how to speak with people. It was a good lesson for me and I also really appreciate that I can be my own boss. I guess one can learn from everything. That case I learnt that if I got into a situation like that, I shouldn’t moan or victimise myself, I should just stay tough and try my best to get out of the situation.

I would have better organised my days and would have started to use task manager much earlier.

Hard work will always pay off. You have to believe that if you put a great amount of time and effort in something, sooner or later you will see the results.

My main strategy is ‘trial and error’ which is, i have to say, quite risky in the case of a hardware product, especially in the case of a shoe. Still, if you are working in a small start up and you want to grow your business, you need to take the risk and try try try, you will fail most of the times but will learn from every step.

During our Kickstarter campaign we made the mistake of overlooking the importance of very basic things, such as getting done all the offical documents in the very beginning. We thought that it should be easily solved and we should rather deal with the complex things like how to improve our marketing communication etc. When we were ready to launch the campaign with an already significant online presence and media coverage and a marketing strategy prepared with meticulous care, we realised that we had to wait 2 more months to start the campaign because we forgot about something related to our financial documents.

You always have to start with the basic things which are seemingly quite easy and evident but could cause loads of difficulties if you don’t pay enough attention to them. We have learnt our lesson and will be aware of these issues in the future.

In the beginning I had another idea in mind that I was thinking on developping to an actual product. It is also a flat packed footwear concept, namingly an origami shoe. It wouldn’t be a DIY product, rather a piece that had a cut pattern inspired by origami and was already sewn together.

I’m really moody and stubborn. People often say that I look very calm and relaxed even in anxious situations but the truth is that inside I’m stressing like crazy.

I use a presentation software called Prezi which helps me build up presenations in a more professional and structured way. In terms of managing my tasks I use Mightybell and Trello, both are quite new products with some weaknesses but help me a lot in organising my days. In terms of designing, I use Photoshop and inDesign. I would mention Squarspace for building and designing websites and also Mailchimp and Antavo which are great marketing tools.

The book called ‘The lean startup’ by Eric Ries. It provides you with easy hands-on solutions and tips how to navigate in the world of startups.

The first person I have to mention is one of my university teachers, Judit Bráda, who thaught me that ‘there is no such thing as unsolvable, it is only matter of time and creativity’.

I really look up to Marlo Esten Bhomer. She is a very influential designer and thinker who experiments with shoe scultpures, folding techniques and visionary design. I am more interested in actual product designing and don’t want to become a conceptual designer but her ideas have inspired my work and my conceptual self.