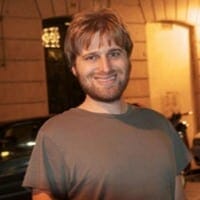 Scott Dudelson is an internet entrepreneur and the Chief Operating Officer of Prodege. As COO of Prodege, Dudelson spearheads the operation and business development of Prodege- owned properties, including the web’s premier online rewards destination, Swagbucks.com, and The Gift App, one of the most popular virtual gifting applications on facebook.

Prior to co-founding Prodege, Dudelson founded Music for Charity Productions – a non-profit consulting firm specializing in the marriage of entertainment brands and charitable causes. In 2005 Music for Charity Productions became one of the first firms to introduce SMS (text message) fundraising in the United States with the launch of the Sweet Relief Musicians Fund ‘text for charity’ campaign featuring Pearl Jam. While leading Music for Charity productions, the firm produced and promoted over a dozen benefit events featuring a wide variety of artists including Sheryl Crow, Bonnie Raitt, Jackson Browne, Sara Bareilles, Garbage, and George Clinton.

A regular on the speaker’s circuit, Dudelson served as both a moderator and/or panelist at SXSW for three consecutive years and has been a special guest speaker at Musicians Institute.

Dudelson has not given up his love of music and continues to be a concert photography hobbyist whose work has appeared in the Los Angeles Times, AOL’s Spinner.com, LA Weekly, and Classic Rock Magazine. He is currently based in Malibu, California.

We have a handful of interesting projects in various stages of development but I’m personally most excited about two near term projects:  opening Swagbucks.com into new international markets and the development of Swag Bucks mobile products.

As the organization continues to grow my typical day continually changes.  When we first started Prodege (which powers Swagbucks.com) a typical day would involve me doing a little bit (or a lot) of everything: business development, customer service, prize fulfillment, compliance, and anything else that may come up.  While I still get my hands ‘dirty’ whenever necessary, we now have an amazing team of over 30 people who each own their respective domains. This allows me to focus daily on improving the core of the business and providing daily guidance / leadership to the departments with which I work directly.

Proliferation of Virtual Currency: When we started Swagbucks.com in 2008 virtual currency was in its infancy and as we have grown so has the general landscape.  I’m excited that Swagbucks.com is continually innovating within the space.

Growth of the Virtual Goods Sector: The new frontier of brand marketing will be virtual goods, and just like with virtual currency, we have made it a priority to be early players in the space. Along with Drake Sutton-Shearer of ReGroup Entertainment we’ve developed a very popular virtual gifting application for facebook called “The Gift App.”  Since we launched in October of last year we’ve distributed over 5 million virtual gifts (including gifts for Star Trek and The Doors) and in the next couple of weeks we will be launching a suite of new gifts with top entertainment brands and NFL teams.

App Marketplace Explosion: App marketplaces are opening everywhere on the web. This, along with the general trajectory of the mobile market, is fueling developer innovation. What’s not to love about people with great ideas having new platforms to distribute their great ideas?

It usually involves getting all the key stakeholders at Prodege into one room and then engaging in intense debate.  Once we have a consensus we figure out how to maneuver any obstacles and get it done.

My business partners: Josef Gorowitz, Ron Leshem, and Eron Zehavi inspire me every day with their work ethic, dedication and individual talents.

When I was first starting out in business I was producing concerts independently.   I was excellent in the execution and organization of the show, but in the beginning I never really bothered to learn anything about the actual production of an event.   When at one event it unexpectedly turned out that I needed to run a soundboard and stage manage I was completely lost and embarrassed.   I learned that the devil is in the details and if you do not know the inside and out of every aspect of your work, you’re not capable of effectively leading.

This is not necessarily a new idea, but there is an opportunity for a savvy entrepreneur (with no aversion to bureaucracy) to connect with local state and federal authorities to set up SMS disaster alerts.  I live in a coastal area of Los Angeles that is prone to yearly disaster and the city has no effective way to communicate with its residents.  If a band can send out a mass text when they have a local concert, it’s certainly easy enough for a city to alert its residents if there natural disaster. Someone take that and run with it!

TechCrunch and Mashable are my go-tos because I want to keep up on what’s happening in the industry.

Buzzbands.la because I’m a music junkie and always want to know what concerts are happening around Los Angeles.

48 Laws of Power by Robert Greene and Joost Elffers because it’s a dirty fun read.

Around Me (for my iPhone) is great because when I’m on the road it helps find everything I’m looking for.

Todd Dipaola, President of Checkpoints, and former Co-Founder of Vantage Media.  Todd is the classic entrepreneur – smart, humble and ambitious.

What advice would you give to a budding entrepreneurs?

Remember that you are only as good as the team around you.

Why do you think Swagbucks.com has resonated with so many people?

Everything we do starts with the question:  how does this add value to the user experience?  I think consumers recognize this and have learned they can rely and trust Swagbucks.com to deliver on its promises and provide a great experience in the process.