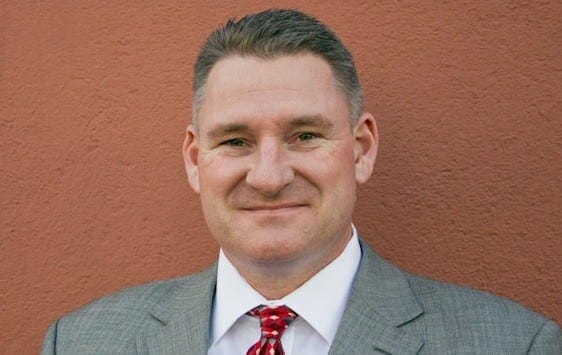 Sean Spellecy is a retired school principal who founded, and became the CEO of NewDawn Security. Mr. Spellecy is married and the father of one son. He graduated high school in Issaquah, Washington, accepted a college scholarship to play baseball in Arizona and was drafted by the Baltimore Orioles 1989. Numerous injuries forced him to give up his dream of playing professional baseball so he went to work for a concert security company working his way up in the ranks of executive personal protection.

At age 25, Sean went back to school to finish his degree at Arizona State University and received a Bachelor’s degree in Human Communications with a minor in Marketing. Taking time off to spend three months caring for a friend diagnosed with Lou Gehrig’s disease, Sean realized his passion of helping make a difference in someone’s life any way he could. He turned to teaching and worked with homeless high school students accepting a faculty position at Thomas J. Pappas School for the Homeless in Phoenix,AZ. He later served as principal there while graduating Summa Cum Laude with a Master’s Degree in Education Administration

3 years into his principalship at Bixby Middle School in Bixby, OK, a rash of horrific crimes committed against his students changed his life yet again. Seeing that parents and schools were unprepared, untrained, and ill equipped for preventing these crimes from continuing it prompted his desire to improve school and family safety. Problem was, there was not any type of security training company, or consulting service that understood the constraints of school “life”, didn’t charge an arm and a leg, and did not want to participate in analysis paralysis.

Infusing all of his experience with young people, education and security into the effort, Sean, legal, education, and law enforcement personnel helped first create the “Family Protection Program.” It’s central piece was a USB Flash Card embedded with a program that among other things, drops Amber Alert processing time from 90 minutes on average to less than 5 minutes. A year later the 26 Safe School Standards were developed identifying a way to measure and improve school safety and security. Now combining those two programs allow for NewDawn Security to provide the “Certified Safe Site” program to private and public schools wanting to increase their staff and student’s safety and security both on campus, and away from it.

1) Software and hardware requirements for an immediate lockdown notification system for schools and law enforcement.

2) 27 follow up proposals from schools wanting us to do our assessments and improvement plans.

3) Setting up an employee hiring system with Hire Heroes USA

Where did the idea for NewDawn Security come from?

Utter Desperation. As a school principal (about the time MySpace and Facebook started) we just started getting “hammered” with both tragic situations, and crimes committed against and by students, and schools nor parents were  prepared for that. And there was no one out there to turn to for help that you could trust.

When you serve schools you can plan all you like, but whatever comes up that day takes precedent. Usually my day starts at 5am and ends around 11.

First I run it by my team, then our clients (which really helps, and they like being included in developmental projects), then on online forums of security professionals. I haven’t had an idea yet that hasn’t been either crushed or encouraged by this process.

Honestly, it was being a school principal. The job was by no means horrendous, just disappointing. The kids and a healthy majority of adults were great, but what I could not get over was how much your hands were tied. Believing that you could run a school, positively influence many, and provide an engaging learning environment for staff and students contrasted sharply with what you were told to do. What I absolutely love however was what I learned from it. Not only from a security standpoint, but from a leadership standpoint. Having the first-hand knowledge and experience on how to implement 26 safe school standards was learned first by seeing the need. Being able to work with a group of people who are all motivated by the same thing, and second, are not afraid to exhibit passion for learning better ways to do their job makes leading them so much simpler. Just make sure they have what they need, honor them for their commitment, and get out of the way.

I would have invested in focus groups. It would have saved me thousands of dollars and time if I would have asked questions and listened instead of trying to convince people that they have to have what we do.

Lack of business development knowledge. We knew we had a great idea, but a great idea does not mean you have a great business. This almost killed us, but the hiring of business consultants with experience in successful startups saved our keister.

Make sure you see the ROI with marketing, especially with social media.

NewDawn Security has over 10K Twitter followers that I paid a social media marketer to help build. Not once have I ever had one follower ever develop into a lead that got us a visit to a school…yet.

I would make it a law that pluralism was not only taught in every school everywhere, but that in order to have a drivers license or vote you had to pass a “pluralisim” background check.

I think we would all do a little better in this world if we did not try and shove our belief systems down people’s throats. The ability to accept more than one idea as fact shows intelligence and tolerance not stupidity and weakness..

My favorite bodyguarding detail was with New Kids on the Block. It was only a 3-day assignment, but I really enjoyed meeting those guys.

Google Alerts – Ability to have every bit of news regarding our industry, our clients, and trends

LinkedIn – Great groups with all sorts of refrences and sales leads

The Shack. I think the authors view on who God really is and what God really wants from us would satisfy our community to no end, regardless of your religion or lack of religion

Mark Suster—he knows the path that entrepreneurs need to follow.

Anita Campbell—she not only lets you know what every small business needs, but then when and where to find it.

Saturday. I coach Little League, and on Saturday we had an 8 year old up to bat with 2 outs and the bases loaded. He fouled off a pitch while jumping up and down and swinging at the same time. I told him (from the first base coaches box) to keep his feet still when he hits, he answered, “I can’t I gotta pee right now.” 35 other people laughed out loud as well

Mike Finch, guy I knew who was diagnosed with ALS at 30 yrs old. Lived more in the 5 years after his diagnosis then most of us will live in 80.

If you have never been a salesman, and your venture demands that you be a good one, is it possible?

The answer is yes, and in my case I did it by stating right off the bat, “Look, I am not a salesman, I am a retired school principal who developed a service that all schools need”. That helped me immensely, and in an industry that is inundated with people trying to always sell you something, it put my customer base at ease as well.

Do you ever feel satisfied with where you are versus where you came from?

No. I feel satisfaction at times, but never satisfied. I believe that I have a service that every school in the World could benefit from, and until we accomplish that I will keep pushing myself and supporting my team with what they need to get there.