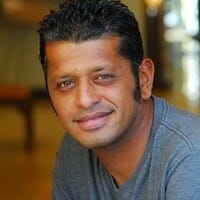 [quote style=”boxed”]It all comes down to action. I see everything I do as an experiment in progress.  I may bounce an idea or two off of people for feedback. Sometimes they won’t like the idea but I’ll proceed anyways.  But when I have new ideas, sometime I’ll let them cook for a day or two, and revisit them because they get more solid when they’ve been cooked a bit.[/quote]

Srinivas Rao is host and co-founder of BlogcastFM which he is currently building into an online media empire. He entered the world of blogging and social media by accident when he completed his MBA program and was unable to find a job. Since launching The Skool of Life in April 2009, he’s grown the site to over 2000 subscribers, been a speaker at Blogworld, and interviewed over 150 bloggers for BlogcastFM. It’s a well known fact that his schedule is subject to change based on surf conditions.

I’m working on turning BlogcastFM into a full blown media empire.  The site currently contains over 150 interviews with successful bloggers and I’m continually thinking about how to expand the content offerings.  We’re currently planning strategic partnerships and looking at different revenue models. Recently we landed an exclusive sponsor DIMEPR.  Our goal is to reach over 1 million downloads a month.  I’m also working on self publishing my first book- The Skool of Life: What You Should Have Learned in School, but never did.

I wish I could tell you I had a typical day.  But let me give it a go. The first thing I usually do is check the surf report because that more or less will determine the structure of the rest of my day. If the conditions are right I work in two sessions (morning and evening).  After that I spend an hour writing. Usually it’s free form with no plan or structure for where the content is going to go. That’s more or less how I write everything these days. I also update any social media platforms that I work on for clients. After reading through my favorite blogs, I respond to comments on mine. I usually try to work in a few interviews for BlogcastFM every other day. I also spend about an hour just talking to people on twitter.

People who meet online meeting in person on a regular basis.

It all comes down to action. I see everything I do as an experiment in progress.  I may bounce an idea or two off of people for feedback. Sometimes they won’t like the idea but I’ll proceed anyways.  But when I have new ideas, sometime I’ll let them cook for a day or two, and revisit them because they get more solid when they’ve been cooked a bit.

The ocean. Surfing is the main source for all my ideas. It’s strange but my best ideas come to me when I’m not thinking.

When I was in business school I was partnering with some people on a web site. They didn’t want to move as quickly as I did. So went on without them and didn’t tell them until near launch. My reputation became that I couldn’t be trusted. The lesson was simple. Be upfront about everything  even if it might result in disagreement. It’s hard to rebuild bridges that are burnt.

Start a digital magazine about the community you live in. Tell the stories of the people and the area. Grow the readership and then go to local businesses and get them on board as advertisers. Give the magazine away for free.

The Harvard Business Review Blog. I read it because it’s a world class education that doesn’t cost a dime.

Anything by Richard Branson. The guy is inspiring and truly a brilliant entrepreneur. Why not model yourself off of somebody like that.

Macjournal. I do all my writing in a distraction free writing tool because I have ADHD. That’s why I can get so much writing done so quickly.

@TMFProject because she has one of the most unique voices in the blogosphere.

@nickreese because he will push your boundaries and ask you tough questions.

@juliatarq because she’s a new blogger that will rise to stardom.

A few weeks ago. No comment on what caused it.