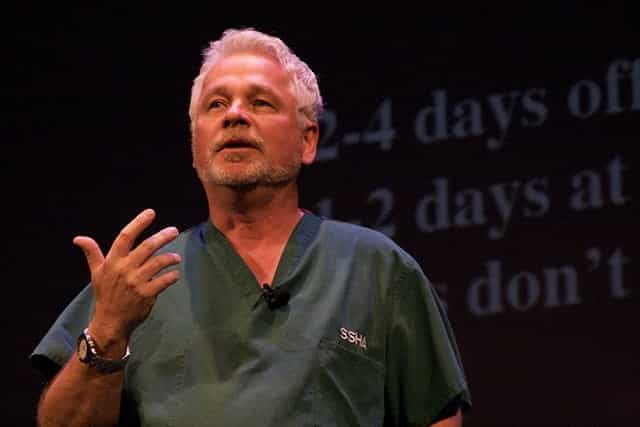 [quote style=”boxed”]Listen to the needs of the customer- the more I “hear” them, the more productive I become.[/quote]

Dr. Terry Simpson is trying to transform health care – one kitchen at a time. As a weight loss surgeon he says “I turned in my surgical scrubs for an apron” stating that he spends more time teaching patients to cook than operating on them. As a board member of a hospital and primary care center, he is focused on excellence in healthcare, and prevention. He has been the television doctor for Daytime TV out of Tampa, has published several books, as well as articles. But he also is on the board of a primary care organization in Alaska that is the model for healthcare and received the Malcolm Baldridge award in 2011 for healthcare. That system of healthcare is being duplicated in Scotland, Singapore, Oregon, and many other places. He currently has invested in developing his business from primarily surgery to teaching people healthcare and how to cook- so while his outpatient center has an operating room – he is most proud of the kitchen where he teaches people to cook, and film s for his television shows, and internet.

Where did the idea for transforming healthcare through one kitchen at a time come from?

As a surgeon we have to have operating rooms, and often hospitals – this is an expensive endeavor- I know, for a while I owned a piece of a hospital. So instead we decided to have our own facility- where we would have an operating room as an outpatient facility- but the main focus was the kitchen area where we would teach patients how to cook, as well as using this as our studio so we could film for television and internet.

My day starts about 5 am and I answer emails, including questions on twitter, facebook, and my favorite google. My 3 year old son gets up around 6:30 so my wife and I get some play time in with him. I’m off to the office by 7:30 in the morning. I will see patients for a bit- if any need an adjustment to their lap band, or if they need an operation – we can do that. Then we go to the studio for some teaching in the afternoon along with filming.

We focus on what we are best at, what our message is, and mostly how can we help. When doing weight loss surgery alone, we thought that was helping- then we realized that none of these people knew how to cook – so we can’t start teaching them how to live better by giving them lists of food- we have to transform them into foodies.

That my fellow physicians are starting to see cooking as therapy for patients- teaching them to cook.

Listen to the needs of the customer- the more I “hear” them, the more productive I become.

I worked in a kitchen – on ships – and it was hard work- and while I loved cooking, I realized I didn’t want to cook for the masses –

I would spend more time in my mom’s kitchen – she is blind now and doesn’t have the ability to cook like she did before – but that is where I learned my first great lessons- and still, when I am in the kitchen and we are together she grabs a spoon and tastes everything.

Know what you are doing now is going to be different in ten years- don’t be afraid to use your capital to finance your future. Invest in yourself long before the stock market, or bonds – you are the best investment. And always listen to what the customer is telling you – they may not tell you directly, sometimes they will- but your worst nightmare customer will tell you the best thing you need to do.

Knowing that no matter how much I spend in marketing to get new customers, the best source is free – it is my current customers. So take care of them – and take care of them very well. They are free advertising. Of course, a little bit of good PR doesn’t hurt either – we recently got some nice PR in this story on Fox in Phoenix. )

The economic collapse of 2008 was difficult. 83 per cent of our weight loss surgery patients were cash, and they had cash to pay for surgery. It was like someone turned off the tap, and we had a difficult time changing our business. We realized that our customers who had weight loss surgery sustained our business because they needed help- so we focused on them

Weight loss continues to be a growing business in the United States – and there are a lot of ways to approach it- but approach it by teaching them how to cook meals, in classes.

I’ve been chairman of a board of a company that became a billion dollar business and we returned most of it to its shareholders.

I love Google Plus- I think it will make Facebook eventually look like Myspace- it allows so much connectivity and serendipity.

Chris Brogan’s, Trust Agent – it will change how you think and do business.

Chris Brogan’s work comes up to the top- his owner newsletter ownermag.com is amazing and everyone should get a copy – not just because i am one of the authors in it, but it has great business advice for anyone who wants to own their own business.