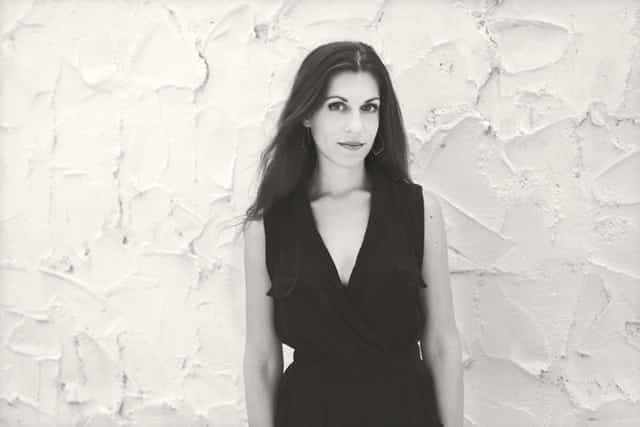 [quote style=”boxed”]Keep doing what you’re doing, trust yourself and never listen to that voice of fear within you.[/quote]

Born and raised in Los Angeles, California, designer Tina Tangalakis always sought to combine her love of art and humanitarian work. As a student she studied costume design at California Institute of the Arts, and later she went on to work as a wardrobe stylist for film and television. After several years in the entertainment industry, Tina decided to branch out and began designing. She split her time between doing her art and volunteering in the local Los Angeles community.

In 2009 Tina decided volunteer abroad and landed in Hohoe, Ghana. There she quickly became enamored with the culture and warm hearts of the friends she made. With her vast background in business and design, Tina decided to team up with local seamstress to begin Della. Tina sought to create more than a business; she wanted to find a way to better the lives of local women, while branching out to the entire Hohoe community.

In less than three years, Della grew to employ close to 30 full-time employees in Ghana, providing them with social security and health care benefits, weekly literacy classes and monthly mentoring in leadership skills. In the U.S., Della has caught the eye of well-known costume designers, actress Ashley Judd, singer Common, and celebrity critic Perez Hilton. Della was also featured on Grey’s Anatomy, and recently launched exclusive products in the Apple Store, becoming the first socially responsible and African-made products on their shelves. Della has also partnered with Nordstrom and Free People, and can be found in dozens of nationwide boutiques.

What aren’t we working on?! A big focus of ours is maintaining the current partnerships we have and building a stronger Della brand identity. So as far as future projects, there is some fashion design in the works, and this is a project that really gets me excited.

Where did the idea for Della come from?

I began Della when I went to Ghana as a volunteer. My background is in design, and it was just the perfect storm. Before Ghana, I had freelanced with a company that manufactured in China and distributed all over the U.S. Upon working with local seamstresses in Ghana, the idea hit me: why not manufacture in Africa? The people there needed jobs and I wanted a career in design on my own terms: business with a conscious. Della was a way of combining both.

Lately I’ve been traveling a lot, specifically to Ghana and New York. These days are unpredictable. However, when I’m at our home base in Los Angeles, I’m typically on my computer by 9:00 a.m. During the day I work with my team and interns on various projects, and I finally take a break around 6:00 p.m. It’s been difficult trying to find balance and give myself a time limit on how long I work. I love what I do, so often, I’ll work into the night and not even realize it. However, I’ve gotten very good at taking evening breaks, finding time to exercise and/or meeting up with friends.

I just get an idea and I run with it. Having an idea is one thing, but acting on it is another. I find that with any new idea, you just need to have to courage to take the first step.

The combination of fashion and socially responsible products. I originally left the design world because there was something unsatisfying about it. I wanted to design, but I wanted my work to have a purpose. Now I have found a way to do meaningful work in my field, and fortunately, socially responsible consumerism has become a trend. Through businesses like Della, I hope to keep it the norm.

Perhaps I’m too much of an optimist, but I can’t classify any job I’ve done as the “worst.” When I was 14 I did office filing for my dentist, which was boring. But at that time I took pride in the fact that I was so young and able to have a job. Later I worked at an independent movie theater which was a great experience. I always find that attitude has a lot to do with how you perceive a job. Like anything, you generally get from it what you put in.

At this point, nothing. I really feel that every path I chose in my 20s led me to become who I am today. Sure, I’ve made mistakes, and challenges arise on a daily basis, but that’s a part of the fun, right?

Be persistent and don’t take anything personally.

I’ve heard the word “no” a lot, yet I always took that as a challenge and tried to find a creative way to work around it. Even when it came to working with Apple, the first time I approached them they told me, “no.” I told them I’d follow up in six months, and I did. The second time around, it was a different story.

Business idea? Hmm, I’m not sure about that one. I’d say find what you love and don’t be afraid to go after it. Anything is possible.

I’d take away everybody’s fear. Overcoming fear was a big challenge in my first year of starting Della, and I believe it is a major factor in why more people don’t follow their dreams. How would I change it? Well, I’d wave my magic wand and the world’s fear would disappear.

Well, I can’t get too personal, but I’m addicted to iced tea and make a mean batch of chocolate chip cookies.

I am not very technologically savvy. I consider myself very old fashioned in that way. I’m trying to get better, but my advice in this realm is not very strong. I stick to Google and LinkedIn as a way to track down vital information for industry contacts. Also, Pinterest is a great way to create a virtual vision or storyboard.

I’m sure that all of the entrepreneurship books I could recommend have already been discussed before. I find a lot of joy in fiction, especially fiction that has a bit of philosophy in it. One of my favorites is Ishmael by Daniel Quinn.

I’m not very Twitter savvy and rarely use this tool, however, one of my favorite people to follow is Steve Martin, the comedian. Why? Well, he’s funny.

Earlier today my photographer and I were walking back from lunch, and we both simultaneously broke out singing at the same time. Lately we’ve been obsessed with really cheesy music from the ’90s, and this just made us crack up in the middle of the street.

The Eleanor Roosevelts and Arianna Harringtons of this world are a huge inspiration. They are beautiful, feminine women who have overcome a lot to achieve success. However, on a personal level, my dear friend Connie has acted as a mentor. In the ’80s she worked hard to be a successful rock-and-roll stylist. Later she decided to give it all up and move to Hawaii, and now she is living in a tropical paradise, building her dream home with her husband. Her presence in my life has shown me not to be afraid of achieving my dreams and that anything is possible.

What’s the best professional advice you ever received?

Fake it ’till you make it.

What would you tell your 20-year-old self?

Keep doing what you’re doing, trust yourself and never listen to that voice of fear within you.