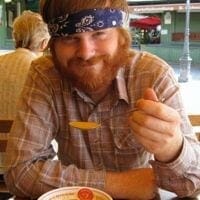 It’s not news that some of the most successful bands of this era have made good portions of their living through advertising, but when you take a deeper look you begin to see just how intimate the two worlds have become. In the Winter of 2006, a Toronto based indie Rock band played a packed out show at the Wow Hall in Eugene, Oregon. Brian Hall’s band at the time was asked to open. A member of one of the visiting bands took a liking to Brian and his music. As the night passed the two sat and chatted about life on the road, and the difficulties of attempting a music career. As it turns out, these Toronto legends had more figured out than they let on. When they were not on the road playing shows, they were tucked away in their home studio in Toronto, writing music for advertising. The things that Hall learned that evening would prove to be vital in his professional development.

Hall had just recently graduated from the University of Oregon with a seemingly meaningless degree in music, and had been stumped by post-academia up to that point. The following months were a real gut check, but eventually he yielded to his curiosities. Hall and his wife decided to move north to Portland and set up shop. x

Things took very slowly at first. There were dozens of obstacles and the learning curve was steep. The first big break came at a happy hour mingle. Hall came into contact with a man by the name of Joey Prather. Prather was an extraordinary musician and a seasoned advertising composer. Prather reared Hall, showed him the anatomy of the industry, and gave him the resources he needed to succeed. During the height of their relationship, they shared a space in downtown Portland and won some substantial work.

Brian’s skills grew and grew, and in 2010 he co-founded Marmoset Music. Brian’s unique ability to appreciate the spirit of a spot and translate the intangibles into compelling and emotionally conducive sounds has been the catalyst to his early and continued success. From time to time, he also enjoys exploring opportunities in scoring soundtracks for independent films and other creative projects. When he’s not working his magic on television commercials, Brian finds time to write music for and lead his Portland-based baroque-pop band, Sunbeam.

I’m currently finishing up my band’s debut record, which is a lot of fun. Today I’m scoring a couple golf spots for Callaway – one for Phil Mickelson and one for Ernie Els. We’ve also got some work coming down the pike for Nike, Coke, and Chase.

Very slowly and thoughtfully. On the entrepreneurial side of things, I think a good idea almost always grows and takes form if you just make yourself ready for it. I suppose In relationship to making music, things can happen much faster. If you don’t jump on them, they go away. A lot of time goes in to understanding how different notes and chords and sounds effect the human emotions. The better I understand that, the closer I can get to actualizing what’s in my head.

Helping other people succeed. Working hard and seeing yield. Making music and sharing it with my friends. Time off is also very inspiring to me. Hah. The Portland music scene is really amazing these days. The level of musical drive is amazing here and there’s so much good energy. It’s really nice because at the end of the day, you might have bumped shoulders with some really important people, but there’s an understanding that they are just people. You don’t run in to a lot of the super ambitious and artificial types in Portland. Most people just want to make music they are proud of.

One time another composer here in Portland, whom at the time I didn’t know very well, asked me to help flush out a project for a big brand. He left me in front of his computer working on this job that was about 50 levels above what I felt I could handle at the time. I was way out of my league and I was so scared that I completely choked, destroyed his project, and was barely able to save it so he could continue on. I was afraid he would never talk to me again. In the end, it was very stressful, but somehow everything worked out okay for him. I suppose I was really hard on myself after that experience because I felt like I had really blown it in a big way. There’s a thin line between putting yourself out there in uncomfortable situations and walking directly into something that you will surely fail at. With that said, I do think failing is an inevitable part of a successful person’s life. It’s best to make sure your failure doesn’t put someone else in a position they can’t get out of.

If you are a one of those musicians who has no problems with advertising and working with brands, but are weary of working with licensing companies – it’s time to change your mind. We’ve run in to lots of very talented folks who don’t want to work with us because they are skeptical about being under contract or maybe they are intimidated by the details of things. This is unfortunate. Ultimately, you have to be in the game if you want an opportunity to win. You have to be able to take on a little risk if you want to gain something. This is true with music licensing.

I bought a bunch of books early on in my career and most of them were not very helpful. My most productive resources have all been human beings. “Mix It Like a Record” is awesome, but it’s not a book – it’s an instructional dvd. Logic Pro is the primary music composition and recording software I use. I like it and a lot of composers use it so it’s handy for sharing projects sometimes. There’s a lot of books and resources out there for making music.

Jon Collins or Jeremy Pryor – both of Epipheo Studios. These guys are building a ridiculously successful business that is worth taking notice of. Jon is a friend. I have never met Jeremy, but he certainly is a genius.

Do you enjoy being an entrepreneur?

I certainly do. And at age 28, I suppose I deal with nearly all of the typical woes of the young business owner. Things can get very stressful very quick when you’re working in the advertising industry. The truth is, although I have been self employed for about 3 years now, I wouldn’t have really called myself an entrepreneur until about a year ago when my business partner, Ryan Wines, and I started Marmoset Music. Before Marmoset Music, I was just a guy who sat in front of a computer and made music all day – a freelancer. It was a great gig and I was doing well financially and having lots of fun. That time of my life blew all my expectations out of the water. Moving onward, starting Marmoset Music has presented a lot of changes. Things are busier now and as the business grows, things are not as simple as they were working as a freelancer. That said, the upside of going in to business has been huge. I’ve gotten to know lots of very wonderful and talented musicians, and I get to give my friends opportunities to succeed. At the end of the day, you can’t put a price tag on doing what you love.

How much of your success has been because you were in the right place at the right time?

I am persuaded that with hard work you can manipulate the odds. My success has not felt like luck to me. I have certainly been in the right place at the right time more than once, but I guess I think I was there because I was already headed in the right direction.

I feel as though, somehow, I am doing what I am meant to be doing. I believe there is something very powerful in this concept for everyone. I think we all have a tendency to go to war with ourselves. For me, a HUGE part of the battle was just getting to the point where I was willing to follow my gut… It was sort of a messy process for me personally. Imagine a grown married man with a music degree sitting motionless on his couch for three months straight while his wife works hard paying the bills. At the time I was a wreck and it definitely required some time, contemplation and resilience to figure things out. I suspect I would not have made it this far if I had not gone through that time and process.