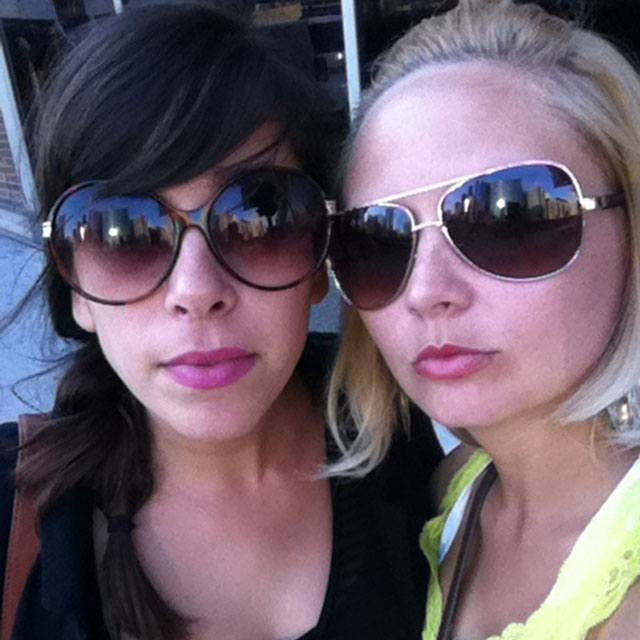 [quote style=”boxed”]If we were to start again, we would definitely want to be born into money. Not being fed from the silver spoon is the worst decision we’ve ever made.[/quote]

Margaret Rode, together with her best friend and co-founder, Becca Feroe, run a Chicago start-up called doublesDate. Margaret and Becca never had a reason to consider the state of online dating until they became newly single in their late twenties, following long-term relationships. When they finally took a good, hard look at the online dating scene, they distinctly recall wanting to throw-up. Margaret and Becca felt the current state of online dating was unnatural, uncomfortable, and seen only as a means to an end; something to be used by individuals who weren’t meeting people in their everyday lives. And they didn’t identify with this at all. So, instead of resigning themselves to the current online dating scene, Margaret and Becca decided to do something about it, and went to work creating something they themselves would want to use.

Margaret and Becca describe doublesDate as social dating, and more resourcefully, “the love child between Match.com and TimeOut magazine.” doublesDate differs from other online dating sites in that 1) users meet online but are then required to bring a wing(wo)man when they get together offline for initial dates, and 2) it connects users to local places and events in the city. doublesDate’s tagline is “more fun in your city, less awkward on your date”, and its mission is to create a more relaxed and social avenue of online dating, where people can meet one another among friends, while exploring cool places and events in the city.

Apart from being entrepreneurs on a mission to change the game of online dating, Margaret is a writer and Becca is a teacher. Margaret lives in Chicago, while Becca resides in St. Paul. They first met and bonded over being mediocre tennis players on their college team. In addition to business ventures, they love traveling, hip-hop, and reality television.

Right now, we’re finalizing our MVP with our kick-ass developer, Omar. It’s almost ready for a beta launch, in which we will force all of our family and friends and frenemies to promptly sign up and play around.

Where did the idea for doublesDate come from?

At the end of last summer, we both became newly single after years of being in long-term relationships. We were slightly/totally freaked out by the idea of having to start dating in our late 20’s and at some point we had a conversation that went pretty much exactly like this:

Margaret: Ew. Are we going to have to start online dating?
Becca: Gross. I would never go on an online date unless you came with.
Margaret: Seriously. Me neither.

So we did what anyone* else would do; we started our own online dating business.

*anyone, in this context, means almost no one

Frantic. We both work full time day jobs. Our current team of five is located in four separate states and one’s on another continent. So we spend all day at our jobs and then come home and spend most evenings emailing, gchatting, and Skyping in an effort to check various items off our ever-growing to-do list.

We’re awesome best friends and business partners because there’s a little bit of magic living in the dynamic between us, sparking creativity, adventure, and drive. It’s the reason we’ve been to 17 countries together and the reason our lil’ idea has become a full-fledged business venture (or “business adventure”, as we like to call it). We like to think we’ve got the perfect balance between work and play, and trust me, if we weren’t able to have fun running this start-up, we would have quit long ago.

We’re excited about women-owned businesses! We’re not sure you’d call it a “trend”, as we certainly hope it never goes out of style, but since we’ve gotten into the entrepreneurial world we’ve met and connected with so many amazing, smart, and savvy business women. We’ve participated in events for female entrepreneurs through organizations (such as CRAVE) and have been blown away with the amount of support there has been and the sense of community shared by these awesome women.

This one’s from Becca: I was once hired to run a week-long kids’ science camp and had to create all of the lessons myself. The brochure advertised that we were going to “blow up a watermelon”, which, apart from using dynamite, I had no idea how to accomplish. I ended up dropping a cantaloupe off a ladder. Lesson learned? Shoot for the moon, and if you miss you’ll land among the stars! (Or, at least succeed in splattering melon over twenty 12-year olds.)

If we were to start again, we would definitely want to be born into money. Not being fed from the silver spoon is the worst decision we’ve ever made.

Laugh at ourselves. We do it all the time and it keeps us sane. You might not find self-deprecating humor on any top ten list of “Keys to Succeeding in Business,” but we honestly have no idea why.

One? Ha. We think most entrepreneurs would agree with us that being an entrepreneur involves consistently coming up short, but forging ahead anyway. Emails are sent out into the void, calls are unreturned, deadlines aren’t met, and articles aren’t published. The key is to keep going, and recognize the small victories of each day, which could be as small as a $10 contribution to the campaign or a hot new Twitter follower. As long as we stay positive and keep working hard, we know success is still ours to grasp.

We would like to reverse this question. Please send ideas ASAP to [email protected]

World peace, obvi. Not sure how to go about it just yet, but again, ideas are welcomed at [email protected]

We find the Kardashian sisters secretly inspirational. Sorry, but we do. Are they completely spoiled? Are they out of touch? And do they make questionable life choices? Duh, duh, and duh! But they’ve built an empire, are smarter than people think, and if they wanted to get best friend necklaces with us, we wouldn’t say no.

1. Google Docs. We’re in love with Google Docs. Collaboration is key for us and Google Docs allow us to work together without losing time by sending drafts back and forth. With our four team members being in four different states, any tool that supports our collaboration is adored.
2. Skype. It makes the world seem that much smaller. In one 20-minute Skype meeting we’re able to accomplish things that would otherwise require a day’s worth of emailing back and forth. We also use Skype to visit with our nephew and niece, whom we adore and are totally obsessed with.
3. YouTube tutorials. Seriously. We have watched an embarrassing amount of Youtube tutorials on everything from “How to add music to your iMovie” to “How to give a great elevator pitch” to “How to C-walk” (that last one isn’t exactly business related per-say, but it is true, and if you ever run into us we’ll be more than happy to prove it).

One Hundred Years of Solitude by Gabriel Garcia Marquez. Because it’s amazing. We’ve each read it more than once, in both Spanish and English. No – it doesn’t contain business secrets – but it does contain the most lovely prose you’ll ever read.

@SoYeahduh – because Lisa’s hilarious commentary on the Chicago scene gets us every time
@Macncheeseproductions – because Saya Hillman is pretty much the most useful person we’ve come across since we’ve started this venture
@doublesDate – because, duh.

This one’s from Margaret: Today. gChatting with Becca. I told her that my boss joked today that he was going to have to tranquilize me and Becca responded with “I can’t believe I’ve never said that to you before”.

Our heroes are the hilarious and amazing women who are out there doing awesome shi* in the world. To name a few: Chelsea Handler, Mindy Kaling, Janelle Monae, and any women who has ever had anything to do with the creation of Arrested Development.

What’s the best way for people who are interested to get involved with doublesDate?

Sign up, fools!! Head to doublesDate.co and set up a profile. It’s still the beta version, so go easy on us.

Will you ever get married?

Who are you, my mom?